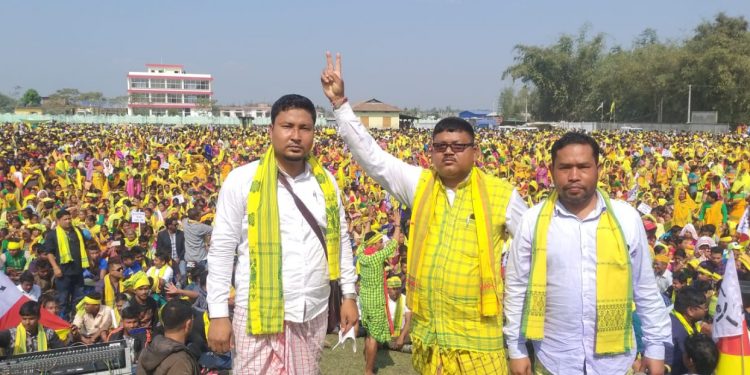 The All Koch Rajbongshi Students’ Union (AKRSU) on Sunday staged a demonstration at Dimalgaon in Assam’s Kokrajhar district.

The demonstration was staged demanding a separate state of Kamtapur, Scheduled Tribe (ST) status and constitutional safeguard for the community.

Various stakeholders of Koch-Rajbongshi community including Koch-Rajbongshi Sahitya Sabha, Koch-Rajbongshi Mahila Samiti, Chilarai Sena also participated in the protest which they termed as the ‘final and last warning’ to the government for resolving their issues.

“The government has no genuine interest to resolve the issues plaguing the community which is palpable in recent times,” he added.

AKRSU advisor, Hiteshwar Barman said, “Every political party has betrayed the Koch-Rajbongshis who have been deprived, exploited and governed in their own land.”

It is high time the people of the community must join hands to vent out their anguish against the government as people are losing their patience,” he added.

“If we are not granted ST status we will be forced to float a political party to oust the saffron party,” he also said.

Expressing its dissatisfaction to the Bodo pact signed on January 27 last Barman said, “We were not taken into confidence and kept at dark about the pact, we exhort to grant the community the status of ‘special class’ in the Bodo belt.”

Lambasting BTC supremo Hagrama Mohillary he said, “Mohillary maintains double standards, he advocates for grant of ST status to us before polls while after polls he opposes any such move in Dispur and Delhi.”

“We have to gear up for giving a befitting reply to the saffron party as it is the need of hour,” he added.

AKRSU joint general secretary, Dibyajyoti Deka said, “We are not in need of lolipop of false promises anymore, if the government doesn’t grant us ST status within three months we will reply them in polls.”

The students’ body also avouched of intensifying their protest if their demand of grant of ST status is not fulfilled.