Assam government is trying to stop the common people from protesting against the CAB which is totally a democratic protest: AAKJSU

The All Assam Kalita Janagoshti Students’ Union (AAKJSU) has extended support towards the 11-hour Northeast bandh called by the North East Students’ organization (NESO) against the Citizenship Amendment Bill (CAB), 2019.

The anti-CAB protestors in Assam and other parts of the Northeast have already started massive protests against the bill.

Amid protests across the Northeast against the CAB, 2019, the Lok Sabha passed it in the intervening night of Monday and Tuesday.

According to reports, while 311 Lok Sabha MPs voted in favour of the bill only 80 MPs opposed it.

The bill will now face a crucial test in the Rajya Sabha. It is likely to be tabled in the Upper House of the Parliament on Tuesday. 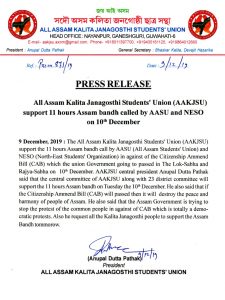 AAKJSU president Anupal Dutta Pathak said the central committee of the union along with its 23 district committees will support the 11-hour Assam bandh on Tuesday.

Pathak said, “If the CAB is passed by the Parliament then it will destroy the peace and harmony of the people of Assam.”

He also said, “The Assam government is trying to stop the common people from protesting against the CAB which is totally a democratic protest.”

He requested all the people from the Kalita community to support the Assam bandh called on Tuesday.