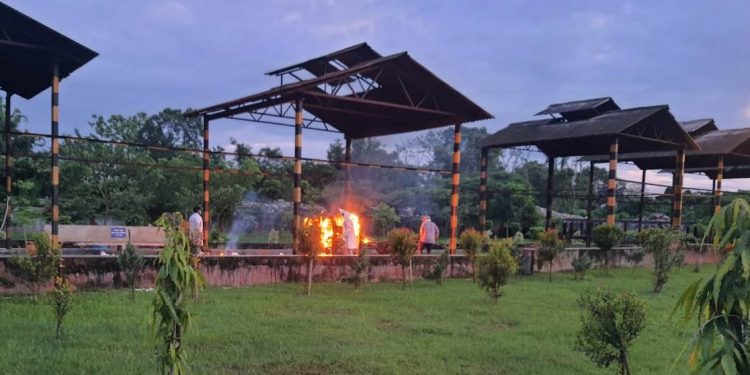 Ashish Sahewal being cremated in Jorhat.

A 36-year-old businessman in upper Assam’s Jorhat succumbed to Covid-19 on Sunday, making him the first person from the district to die of the contagion.

Ashish Sahewal, proprietor of Durga Cloth Store at Baruani Bat, who tested positive for the virus on Sunday morning, died around 3.30 pm at the Jorhat Medical College and Hospital (JMCH).

Deputy commissioner Roshni A Korati said that he had no links with other infected people.

The deputy commissioner said that though he had shown improvement in the morning he ultimately succumbed to the infection by afternoon.

Sahewal, who lived near Vishal Mega Mart, leaves behind his wife, two children, his mother and elder brother.

Sahewal, who was suffering from fever for the past few days, complained of breathing trouble on Saturday and had got himself tested at JMCH.

A JMCH doctor said that they could not ascertain whether he had any comorbidity.

The doctor said that he had been told on Saturday to get himself admitted but had decided to return home.

On Sunday, a total of 26 people tested positive in the district out of which 25 did not have any travel history.

Out of the 25 people, nine belong to Jorhat town.

More than 11000 persons have been tested in Jorhat and 343 have tested positive out of which about 125 are still active.