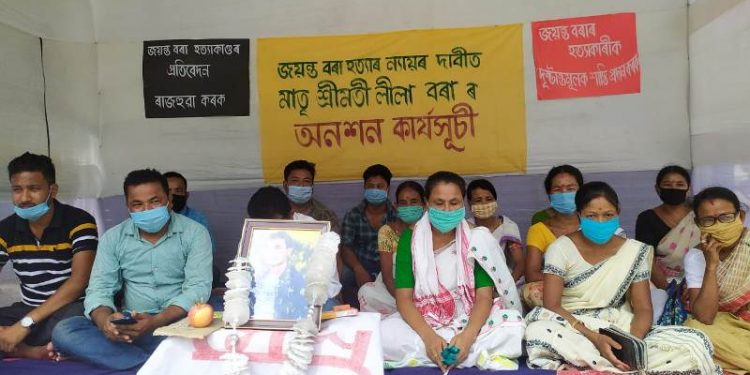 Lila Bora, mother of Jayanta Bora staged a hunger strike on Friday at Borholla Balihan No 15 block in Jorhat district to demand justice for her son who died in police custody in the night of June 14-15.

She was joined in the protest by people of the locality and members of various organisations including AJYCP, Satra Mukti Sangram Samiti, KMSS, and Chutiya Satra Sanstha.

Lila Bora told newspersons that she had lost trust in all kinds of probes as she had given statements to several investigative agencies and commission but justice was yet to be delivered to her son.

She further said that Revenue and Disaster Management minister Jogen Mohan, Agriculture minister Atul Bora, Lok Sabha MP Topon Gogoi had all come to their house the next day and assured them that within seven days a fast track court would be instituted to try the case but nothing had come of that either.

The protesters said that they had lost confidence in the government machinery to deliver justice as the high level enquiry ordered by the government to one man commission Lalit Gogoi, director of Land Records and Survey, had heard public hearings on June 22, 23, 24 at the Borholla IB of PWD but even after two months the report was yet to be made public.

The protestors said that their own investigation had revealed that Jayanta had not died in a mysterious manner but that it was a planned murder, however, the government was not giving any importance to their findings.