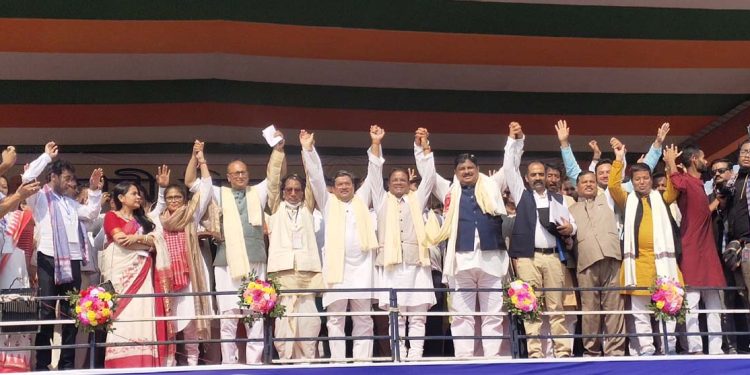 A view of the convention of All Assam Linguistic Minorities (Bengali). Image credit - Northeast Now

All India Congress Committee (AICC) general secretary Mukul Wasnik on Sunday in Hojai said Assam, which gears up for the State Assembly election, is on the verge of witnessing a historic change.

While addressing a convention at Bihutholi playground in Hojai on Sunday, Congress leader Wasnk said, “Once the Congress comes to power taking every community together, the party will work for the welfare and security of the people of Assam.”

Wasnik said, “In the last seven years of its regime, the BJP government, led by Prime Minister Narendra Modi, has only promoted hatred, divisive politics among the different communities residing in different states of India, taking advantage of the situation, to fetch power of the states.”

“But now, the time has changed. The people have understood the saffron party’s political gimmicks,” said former Union minister Wasnik.

The convention was presided over by former minister and Congress leader Dr. Ardhendu Kumar Dey.

Wasnik said, “BJP has used the Citizenship Amendment Act as a political tool for their political ambition. CAA is not a solution rather it is a new complex problem for Assam.”

Speaking on the occasion, state party president Ripun Bora reiterated that the Congress party is committed to safeguarding the interests of the people of Assam. 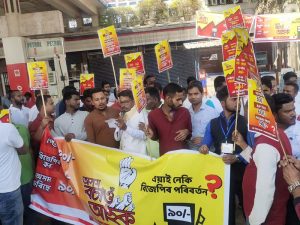 Bora said, “The upcoming Assembly election will be not between Congress and BJP. This election is for the people who will have to take a bold decision by casting their votes to Congress in order to bring peace and prosperity in the region.”

Several leaders from other political parties also formally joined the Congress in Hojai.

“The resolutions taken in this two-day convention here will be implemented once the Congress comes to power,” said Sushmita Dev, the president of All India Mahila Congress.

One of the prominent resolutions taken in the convention was to give Bengali language the status of second language in the state.

The two-day convention was attended by hundreds of people from all over the state.

Meanwhile, Congress leaders began a half-an-hour demonstration all over the state which will continue for four subsequent days to raise their voice against the skyrocketing prices of petrol, diesel and other essential goods.