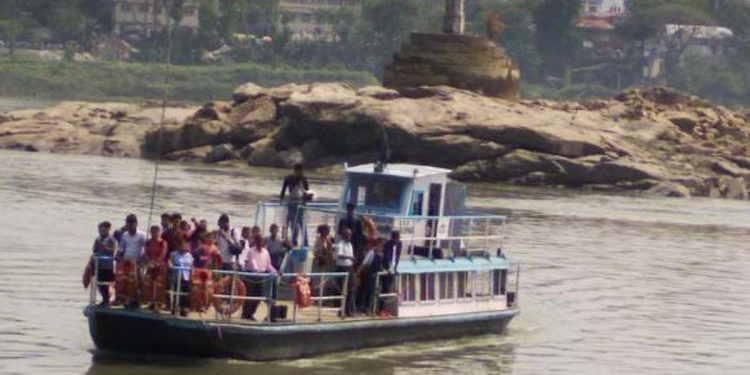 Assam’s Inland Water Transport (IWT) department, which miserably failed to transform the Brahmaputra Waterways as the engine of development, is now caught in a ‘tender scam’.

With the aim to swindle public money, Pabitra Ram Khaund, director of the IWT department has been found ‘floating twin tenders’ for the same job.

Apparently, the game of ‘twin tenders’ is specially designed to award the work contractors of Khaund’s choice.

Interestingly, both the tenders were for the same job — restructuring and renovation works of Pusher Tug PT Godapani (Assam – 96).

Both the tenders are open till 3.00 pm on March 11, the advertisements published in the newspapers, said.

Sources said Pabitra Ram Khaund, who was working as the deputy commissioner of Biswanath district, had requested the government to transfer him to Guwahati to attend to his ailing parents.

Despite repeated attempts, Khaund was not available for comments. 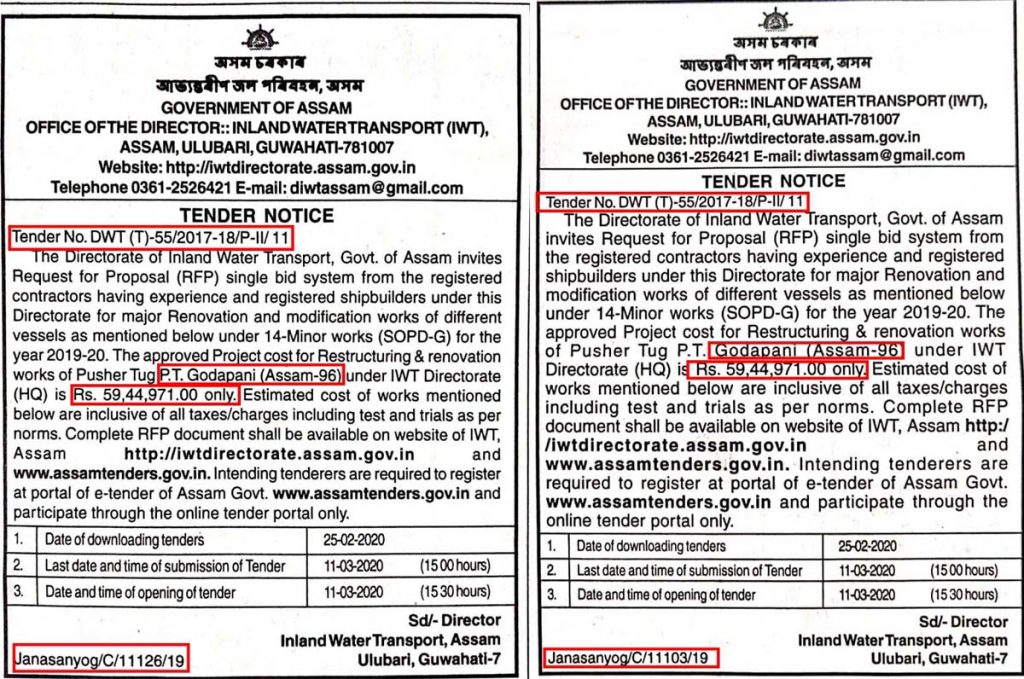 The IWT department totally failed to develop the Brahmaputra waterways as pollution-free and cheap navigation of cargo and passengers.

It was shameful for the people of Assam when on December 27, 2019, Assistant High Commissioner of Bangladesh Tanvir Mansur flagged off commercial cargo service through Dhubri river port.

Two Bangladeshi barges – MV Sagar Express and MV Alvahar – were pressed into service to carry 250 tonnes of crushed stones brought from Bhutan to Bangladesh through the Brahmaputra.

It was really shameful for people of Assam because barges from Bangladesh had to be brought to Dhubri for transhipping of the stones from Bhutan.

Assam’s Inland Water Transport vessels could not deploy vessels for transhipping of the Bhutanese consignments to Bangladesh.

Hundreds of boulder-laden trucks from Bhutan travel through Assam daily, and the consignments are exported through Dalu in Meghalaya.

It is unfortunate that Assam could not make any profit from the transit of freight through the state.

During the last couple of years, the Bhutanese exporters always wanted to make use of the Pandu Port in Guwahati to tranship boulders to Bangladesh.

But, because of the total lack of vision and commitment of the officials of the Inland Water Transport department, Assam could not lap up the opportunity to emerge as the carrying agent of Bhutanese cargo, and especially the high volume boulders.

Assam could have easily generated huge revenue by carrying huge consignments of Bhutanese boulders to Bangladesh.

Without any commitment to developing the Brahmaputra waterways, the IWT department officials have been shamelessly leasing out Assam’s vessels to Kolkata.

The IWT leased out some of its barges to some operators in Kolkata, who had already taken the vessels to operate on the National Waterway 1, – the Ganga-Bhagirathi-Hooghly river system depriving local entrepreneurs of Assam.

Kolkata-based firms Eastern Navigation and Reach Asia (both owned by the same person) are running at least ten such barges owned by the Assam IWT department since 2008 in West Bengal.

The barges were meant for operating in National waterway 2 which is the stretch of 891 km between Sadiya to Dhubri.

While the BJP-led government talks so much about Jati, Mati, and Bheti, the IWT department never encouraged local entrepreneurs.

Some of the Assam Inland Water Transport department barges, after being used in National Waterways 1, are dumped in Kolkata.

KPL Kaziranga is one such barge that was dumped at IWT station at Dhubri. It was operated on National Waterway 1 and the salinity of the water had made the barge irreparable.

Few months back, some of the local entrepreneurs in Assam had participated in a recent bid for some of the barges meant for operating in National Waterways 2.

But the vessels were leased to companies from outside Assam.