The participation almost doubled and an increase in the resentment was visible.  Slogans of “fight for rights”, “MHRD haihai!”, “No hike, No research!” roared in the campus. 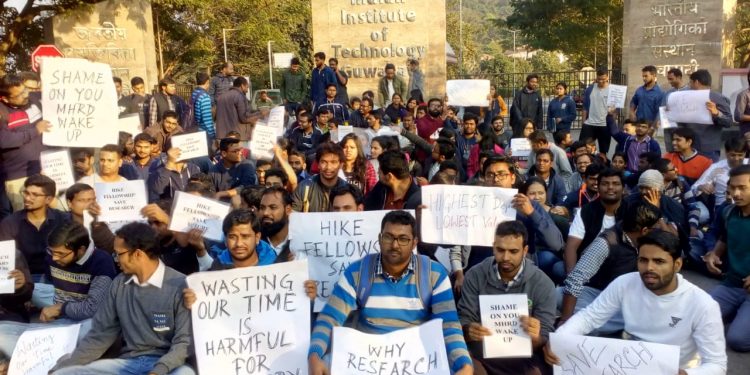 With the MHRD remaining indifferent  to the demand of research scholars all over the country, the scholars at IIT Guwahati continued to stage demonstration for the second day demanding hike in fellowship stipend.

The participation almost doubled and an increase in the resentment was visible.  Slogans of “fight for rights”, “MHRD haihai!”, “No hike, No research!” roared in the campus.

All the centrally funded research institutes (CFTIs) earlier conducted a signature campaign in the month of November 2018. Data are shown in the images below.

The signatures with a cover letter was either forwarded by the head of institute or the student bodies forwarded the letter directly to MHRD. The representative of researchers at New Delhi stated “it is hard to believe the working of MHRD and attitude towards the nurturing scientist of the nation”.

The representatives at IIT Guwahati firmly stated that the agitation will continue till the hike in fellowship is confirmed by the government of India.

The protest rally and meeting are planned to be organised on daily basis, which will for sure have impact on the normal classes running in an institute of repute.

In addition, a nationwide protest is planned in the coming days by closing all laboratories and, boycotting the teaching assistantship duty if the, government does not officially notify for the hike in fellowship.

The administration of all the IITs, NITs and research labs are under pressure; it is made very clear that if all the scholars started to boycott their duties, and come out in roads to demand rather than silently working in lab, it won’t be possible to run a single class.