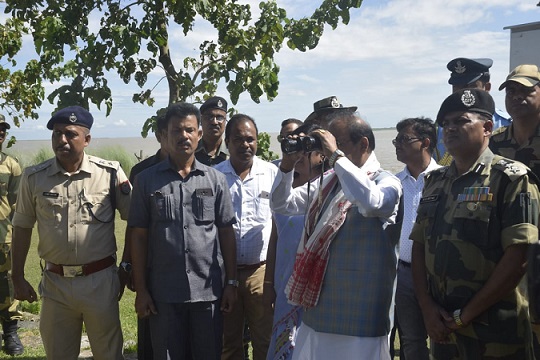 Assam Governor Prof Jagdish Mukhi on Thursday visited the Indo-Bangla border along Mankachar sector in South Salmara and inspected the ground situation there.

In his day long visit to South Salmara Mancachar district he inspected the erosion-hit areas of the district and interacted with the local people. The governor asked the BSF to maintain a strict vigil round the clock.  Mukhi also sought suggestions from BSF to strengthen the existing fencing system.

The governor also visited Hatsingimari Sub-Divisional Civil Hospital and took stock of the medical facilities put in place for the people of the district. He also interacted with patients and took care of their needs. The governor also inspected cleanliness in and around the hospital. Prof. Mukhi also visited Mankachar College and talked to the students and teachers. He appealed to them to religiously pursue their studies and keep the ambience of their educational institution clean.