Assam Governor Prof Jagdish Mukhi held a meeting with the heads of the departments and took stock of the developmental works along with prevailing law and order of Kamrup Metropolitan district at the Circuit House in Guwahati on Monday.

Deputy Commissioner, Kamrup Dr M Angamuthu apprised the Governor about various developmental projects being implemented in the district through a power point presentation.

He said that the district administration has been on its toes to extend the fruits of governance to all sections of the people of the district through various welfare schemes that the governments, both at the centre as well as the state, have been taking from time to time.

The Governor asked the GMC Commissioner to look for permanent measures and formulate plans to manage solid waste and its disposal.

He also maintained that for any city management top priority should be accorded to judicious management of waste and accordingly awareness should be created not to litter garbage on the roads.

Prof Mukhi also took note of the status of health and hygiene, drinking water, cleanliness, education, road and communication, agriculture among others.

Taking a look at the welfare of farmers, the Governor asked the District Agricultural Officer (DAO) to adopt measures to double the farmers’ income and introduce 2-3 crops in the available farming land in Kamrup Metropolitan district. 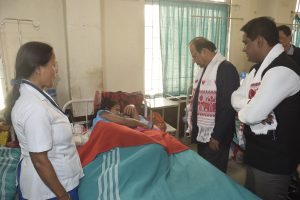 Assam Governor takes stock of development works of Kamrup (Metro) He also asked the DAO to provide the farmers with seeds, fertilizers, guidance on soil testing and motivate to grow right kind of crops at the right land.

He also emphasized that adequate arrangements should be put in place to provide right value of farmers’ productions and asked Deputy Commissioner to monitor it. The Governor further said that agricultural farming should be supplemented with poultry farming, animal husbandry and fishery simultaneously to reap the highest dividends from farming.