Assam Governor Prof Jagdish Mukhi on his maiden visit to newly created West Karbi Anglong district on Thursday, made a fervent appeal to all the law enforcing agencies to work in unison, displaying the highest order of coordination to curb the menace of insurgency, extortion in the district.

He said that whatever insurgent groups are active in the district, can be neutralized through putting spanner on their extortion activities.

He also said that violence can never bring any solution and therefore, asked all the disgruntled groups to hammer out all the differences through discussions.

The Governor also asked the Forest Department officials to protect the forest cover and remove all alleged encroachments. 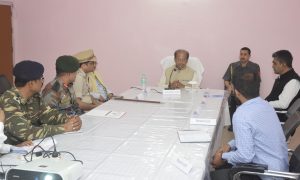 He also asked Deputy Commissioner, Debojyoti Hazarika to explore the verdant tourism potentials of the district and create tourism avenues to attract visitors to the district.

The Governor also asked the district administration to plug the gap between health care needs and the existing facilities in the district.

The Governor also took stock of the other development indicators of the district like agriculture, education, drinking water facilities, roads and communication.