Assam Governor Prof Jagdish Mukhi felicitated young cricketing talent from Assam, Ryan Parag in recognition to his recent form in international circuit including his performance in the recently concluded U-19 Cricket World Cup at a function held at Raj Bhavan in Guwahati on Monday.

Governor Prof Mukhi presented him a memento and congratulated him for his role in the U-19 World Cup which India won beating Australia.

The Governor, moreover, hailed his performance in the semi-final in which he took two crucial wickets against arch rival Pakistan and secured the final berth.

Prof Mukhi while drawing Ryan’s attention to the stiff competition at the national arena asked him to work very hard to sustain his performance at the highest level and bring laurels for the State as well  the nation. 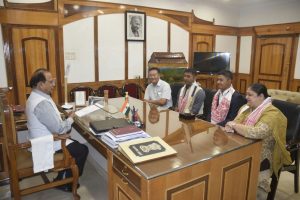 It may be noted that Ryan Parag made his national debut at the age of just 11 years and nine months in 2013.

He made his international debut in July 2017 when he was included in the U-19 team for the tour to England.

He was the second highest run getter in that series with three fifties from four innings.