Assam government to construct a museum in Tezpur in recognition to Jyoti-Bishnu-Natasurya and Sudhakantha: Sonowal 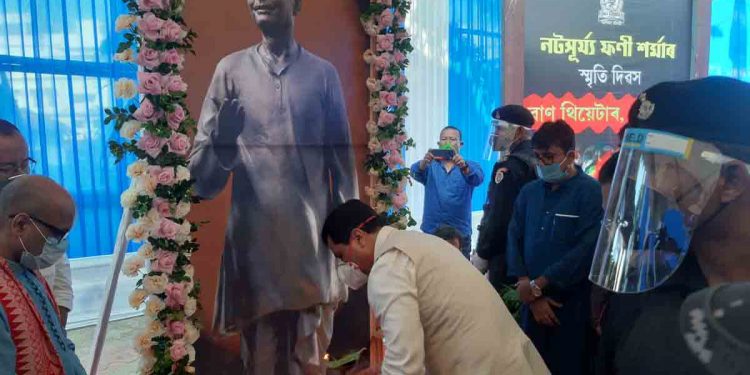 The awards were presented at a function held at the historic Ban Theatre in Tezpur on Friday.

The award consists of Sarai, Commendation, Man Bastra and a cheque of Rs 2 lakh.

The function organised by the Cultural Affairs Department in association with Sonitpur District Administration.

Speaking at the function Sonowal said that under the infrastructure development project, a financial outlay of Rs. 1.5crore has been earmarked for the preservation of the samadhikshetra of Natasurya Phani Sarma.

Sonowal also announced that State government would set up a museum in memory of the cultural doyens like Rupkonwar Jyoti Prasad Agarwala, Bishnu Prasad Rabha, NatasuryaPhaniSarma and Dr Bhupen Hazarika.

The chief minister further said that the state government has been steadfast in savouring the rich cultural heritage and inherent dignity of all the communities, tribes and sub-tribes of the state.

He also said that the present generation will have to take the responsibility to rediscover the society which was given shape and enriched by our forefathers.

He also said that his government always deems it its responsibility to lend more vibrancy to the state which is known for its spiritual supremacy, cultural richness, revolutionary rendezvous and societal characteristics.

“Therefore, the state government has been taking several steps including societal awakening among the youth of the state,” he said.

Sonowal also said that though science and technology dominate the 21st century, ‘We have to take the responsibility to generate awareness among the younger generation of our rich cultural heritage of the state’.

‘Terming that there cannot be any future sans our past’, Sonowal said that within three months after coming to power the present state government held ‘Sohodor’ to enable everybody belonging to different tribes, sub-tribes, castes and sub-castes to converge on the same platform.

He also said the spirit of a harmonious Assam can reverberate if every heart is felt and every mind is listened to.

Stating that the artistes of the state gave the message of unity and harmony, Sonowal termed the historic Ban Theatre a symbol of harmony.

Chief Minister Sonowal also said that though since and technology have contributed immensely, still people have to tread a long-distance removing the evils of superstitions and free the society from the evil various manifestations of superstitions.

He also said that only through a robust work culture a formidable edifice of the economy can be revamped.

Assam is a state full of rivers and rivulets and their tributaries and all these have made the state a salubrious field of development and everybody will have to work hard along with the government to put the state in an absolute growth trajectory.

Referring to Prime Minister Narendra Modi’s call on Atmanirbhar Bharat, Sonowal said that everybody will have to lend their hands in the government’s commitment to making Atmanirbhar Assam.

Stating the intent radiated by popular singer Zubeen Garg in getting himself associated with agriculture, Sonowal said that it would augur well in motivating others in taking agriculture as their vocations to make the state self-reliant.