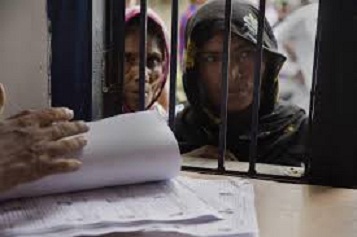 Many people whose names were not included in the final draft National Register Citizens (NRC) went to their nearest NRC Seva Kendrsa (NSKs) on Thursday but faced harassment due to non-availability of forms.

According to information, claims, objection and correction forms were not available in some of the NRC Seva Kendras of the district.

It was announced that whose names were left out from the final draft NRC due to some reasons, would be able to apply with claims, objections and corrections, forms for which would be available from August 10, 2018 at the Seva Kendras and the people could submit the same in NRC Seva Kendras from August 30 to September 26, 2018.

In Dibrugarh, the people rushed to the NRC Seva Kendras to collect the forms, but forms were not available in some of the Seva Kendras.

“In the morning, I went to the Circle office to collect the form but the persons, who are engaged in the work, didn’t want to give extra form. My name was excluded from the final draft NRC and my mother’s name was wrong. So, I asked to provide the correction form but they didn’t reply to my query. I went to them to ask about the process. If they can’t tell me the process, then who will tell,’’ alleged Deep Chatterjee, a resident of Dibrugarh.

He said that he doesn’t know why his name was excluded from the final draft NRC. “I submitted my grandfather’s legacy but my name didn’t appear though my uncles and their family members’ names have appeared in the final draft,” he said.

It may be mentioned that the NRC update process is going on to detect the illegal immigrants but it seems that genuine Indian citizens are also facing harassment.