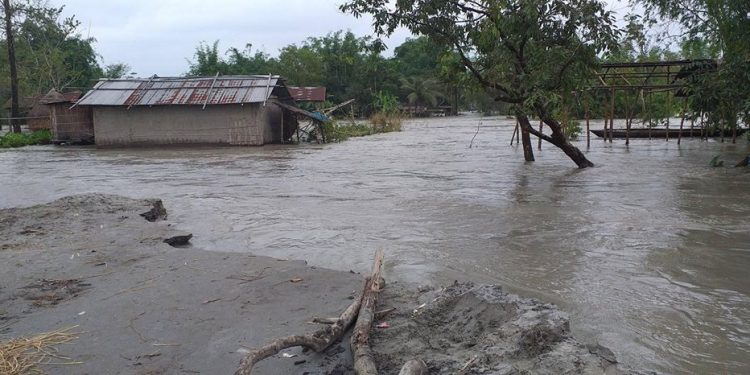 Over 90,000 people of 215 villages have been affected in the flash flood in the district so far.

Flood situation in North Assam’s Dhemaji district has worsened as new areas are being submerged on Friday morning.

The rivers and rivulets of the district are swelling due to the heavy rain for the last few days in Siang region, inundating human habitations in Dhemaji, Gogamukh, Sissiborgaon and Jonai revenue circles.

Over 90,000 people of 215 villages have been affected in the flash flood in the district so far.

The district administration has set up three relief camps and distributed food and other relief materials among the flood-hit families.

Many families in the affected sites of Dhemaji and Jonai circles are taking shelter on raised platforms and river dykes with their livestock and other belongings.

As per report of Water Resources department, water level of rivers is maintaining a rising trend and posing a serious threat for the people of the district.

Jonai Circle Officer Sumbor Chutiya informed that over 57,500 people have been affected in the flood, while about 9,500 cropped areas are reeling under water.

A team of SDRF jawans equipped with rubber boats and lie jackets has been deployed at Lohijan ghat in Bahir-Jonai area for rescue operation.

A 12-year-old tribal girl of Jonai, who was washed away by flood waters, is reportedly missing.

The teenage girl fell into Jonai river after a hand boat carrying seven members of her family capsized on Thursday.

The SDRF jawans are conducting search operation, but they are yet to trace the missing girl.