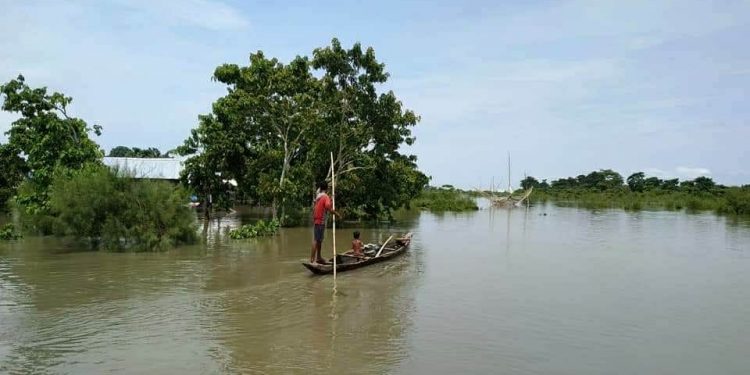 The worst affected areas in the district in the current flood are from Nowboicha Revenue Circle where a host of perennial rivers criss-cross the region originating from the hills of neighbouring Arunachal Pradesh.

Heavy downpour in the district and in the hills of the neighbouring state in the last three consecutive days have left rivers like Panchnoi, Gabhoru, Singra and Bokanadi in spat resulting in the inundation of thirty villages of the revenue circle including croplands.

River Gabhoru has breached a portion of its embankment at 12th Mile in Laluk.

In North Lakhimpur Revenue Circle six villages have been affected by the flood.

In Narayanpur Revenue Circle 13 villages have been affected by the flood.

Villagers were forced to harvest the half-ripe paddy for the inundation caused by the flood.

The flood by Bogeenadi and Kakoi submerged twelve villages in Kadam Revenue Circle of Lakhimpur district.

In North Lakhimpur, the Water Resources department has informed that water levels of Brahmaputra, Subansiri and Dikrong have been flowing above danger levels at various places in the district.

The latest flood has affected agriculture land of 874.5 hectares with a population of 32,647 people in the district.