Assam’s popular filmmaker Dara Ahmed passed away at a private hospital in Guwahati on Monday.

He was 72 years at the time of his demise.

The filmmaker was admitted to the city’s Apollo Hospital on Sunday after he felt chest pain and breathed his last in the hospital on Monday morning.

He was undergoing treatment in the ICU of the hospital.

Dara Ahmed entered the filmmaking industry of Assam as an assistant director in the film ‘Dr Bazbarua’ (1969), directed by Brajen Barua.

After that Dara Ahmed directed a number of popular Assamese films.

Some of the Assamese films, directed by Dara Ahmed include “Rikshawala”, “Jakhini”, “Urbashi”, “Dhrubatora”, “Pooja” and “Devi” (jointly with Sambhu Gupta).

Assam chief minister Himanta Biswa Sarma has expressed his deep condolence at the demise of Ahmed.

In his condolence message, shared on the Twitter handle, chief minister Sarma wrote in Assamese: “I am saddened by the demise of popular director of the Assamese film world, Dara Ahmed. His demise has created a vacuum in the Assamese film world. I wish eternal peace for the departed soul and express deep condolence to the bereaved family members.” 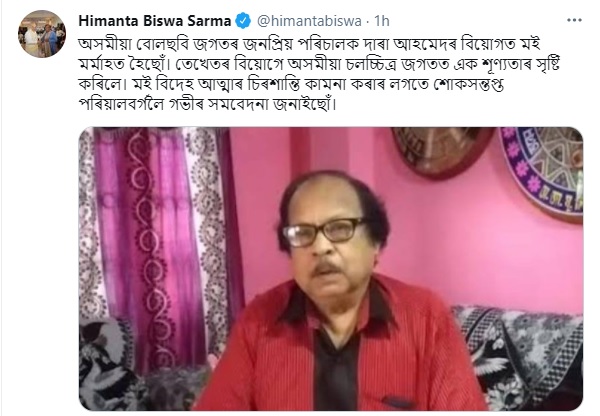