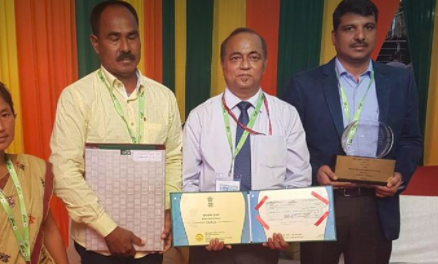 Two farmers from Assam Binoy Likhak of Majuli and Hemkanti Payeng of Lakhimpur received the Krishi Karman Award on March 17.

They were awarded in Delhi in a meeting at Pusa, New Delhi, ICAR complex attended by PM Modi.

Likhak and Payeng received cheques worth Rs 2 lakh each as part of the award.

They were awarded for their excellence in mustard farming in their respective regions. Binoy Likhak is from Birinabari Gaon under Gormur Agri Circle in Majuli, Payeng is from Pokoniyaghat Gaon under Naoboisa Agri Circle in Lakhimpur District of Assam.

Meanwhile, Assam was also awarded the 2015-16 Krishi Karman Award for exemplary success in mustard farming. Mustard farming was done in 2,85,677 hectares of land resulting in 1,99,501 metric ton of mustard production. A cheque of Rs 2 Crore was awarded to Assam Government on the occasion.

Speaking during the Krishi Unnati Mela, PM Modi said that his government’s aims to create awareness about latest technological developments in agriculture which will help in doubling farm income by 2022. He also said that farmers should give up crop burning traditions and instead focus on earning from farm waste as part of multiple government schemes.

Krishi Karman awards were give out to various states for impressive production in various commodities. While West Bengal won the award for high output in pulses, Assam won it for oilseeds, Bihar for coarse cereals and Madhya Pradesh for Wheat production besides Punjab for paddy production. Meghalaya, Tamil Nadu and Himachal Pradesh were also honoured at the ceremony.