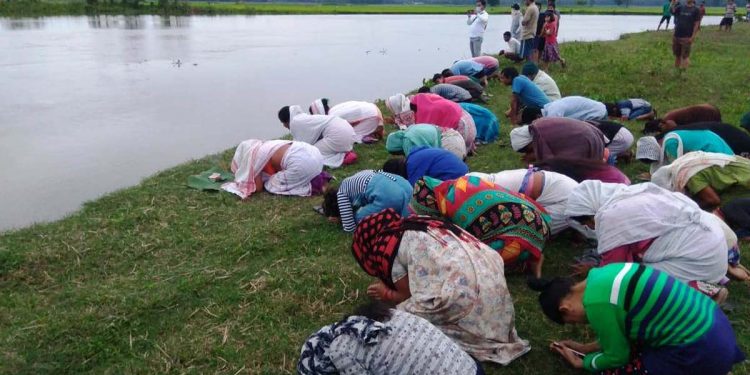 Villagers of Gorkhali in Dhakuakhana offer puja to Laipulia river to save their lives and property from the flood and erosion. Image credit – Northeast Now

A massive erosion by Laipulia river in Lakhimpur’s Dhakuakhana sub-division has forced five families to shift and stay in makeshifts at a cremation ground.

The displacement of the families due to river erosion has taken place in Gorkhali village in No. 6 Nemutengani Ward under Harhi Gaon Panchayat of Dhakuaakhana sub-division.

The families of Degaram Kumal, Chakman Kumal, Ricky Prasad Kumal, Gopal Kumal and Poby Kumal have been displaced by the fast advancing river which has destroyed their homes and agriculture lands.

After losing their homes due to erosion, they had no other choice but to shift to the cremation ground of the village to stay.

“The river Laipulia has been causing damages to our agricultural lands and settlements since 1984. But no preventive measures have been taken by the authorities concerned so far,” said one villager from Gorkhali.

The rural development department erected some bamboo poles in the river bank to contain the river from eroding its bank in the village earlier.

But as the embankment off the river is yet to be completed, the villagers of Gorkhali along with five other neighbouring villages are feeling insecure as with the beginning of the monsoon season.

In a desperate bid, the villagers of Gorkhali recently offered puja to the river wishing to save their lives and property from the flood and erosion in the coming days.