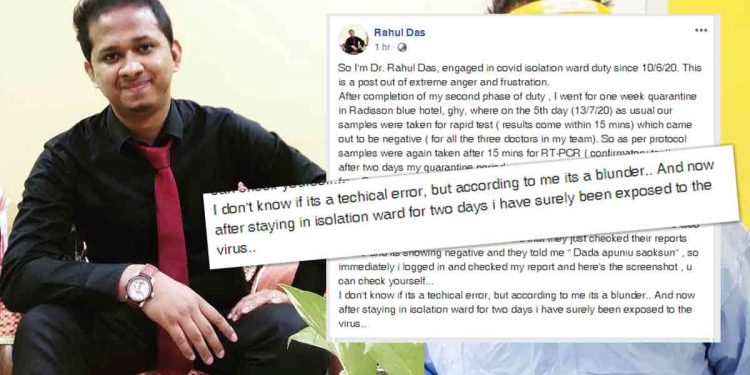 What is wrong with Assam government’s war against Covid19?

While number of positive cases is increasing by leaps and bound, Assam government is getting snared in “mistakes” and “blunders”.

On Saturday afternoon, Dr. Rahul Das, a doctor engaged in COVID Isolation Ward duty since June 10, expressed his anger and frustration on the Facebook platform.

As per the Facebook post, the doctor said, after completion of his second phase of duty, he went for one week quarantine in Radisson Blu hotel in Guwahati.

On the fifth day (July 13) samples of Dr. Rahul Das and two other doctors were taken for rapid test, and within 15 minutes, the results came negative for all the three doctors.

So, as per protocol, samples were collected for RT-PCR (confirmatory test) and after completion of seven days in quarantine, the three doctors checked out of Radisson Blu on July 15.

“….on 15/7/20 I checked out from Radisson blue, but on the same day at around 8 pm, I got a phone call saying that my test result is positive and I thought it was ok, and accordingly next day morning ambulance came, and I went to hospital to get admitted in isolation ward as a patient,” Dr Rahul Das said. 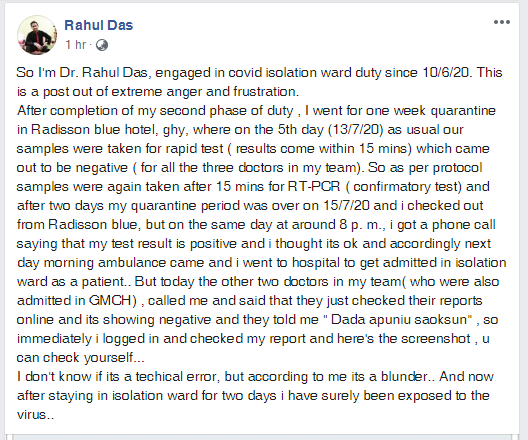 For the next 48 hours, Dr. Rahul Das continued to be admitted in the hospital as a patient.

“But today the two other doctors of my team (who were also admitted in GMCH), called me and said that they just checked their reports online and found the report to be negative,” the doctor said.

“….they told me Dada apuniu saoksun (Dada, you also take a look). I immediately logged in and checked my report, and here’s the screenshot, you can also check it yourself…,” the Corona warrior said.

Amid COVID19 pandemic, the 26-year old doctor has every right to be angry with the wrong report of is test.

“I don’t know if it’s a technical error, but according to me it’s a blunder. And now, after staying in isolation ward for two days, I have surely been exposed to the virus,” Dr. Rahul Das said in the Facebook post.

Will the Assam government be able to identify the person responsible for the faux pas amid the pandemic?

Samir Sinha, principal secretary of Health and Family Welfare Department could not be contacted for comments.