The director of Information & Public Relations (DIPR), Assam, Anupam Choudhury has asked all the district and sub-divisional I&PR officers to monitor and check fake news and rumours arising out of COVID19 pandemic.

Choudhury in a directive to all the DIPROs and SDIPROs also asked the officials to take necessary measures for dissemination of genuine information on COVID19 pandemic.

The direction from the DIPR comes after a fake news was circulated in the name of a non-existent ‘Minister of Communication & Digital Economy’ stating that “from April 4, 2020 all phone calls will be recorded, all social media monitored and Android phones to be connected to the minister”.

In the directive, Choudhury said, “If any such matter is detected, the same should immediately be brought to the notice of the local administration and the undersigned.” 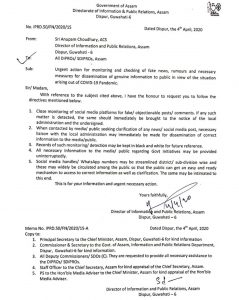 He also stated: “When contacted by media/ public seeking clarification of any news/ social media post, necessary liaison with the local administration may immediately be made for dissemination of correct information to the media/public.”

Records of such monitoring/ detection may be kept in black and white for future reference, Choudhury said in the directive.

“All necessary information to the media/ public regarding Govt initiatives may be provided uninterruptedly,” he stated.

The DIPR also said social media handles/ WhatsApp numbers “may be streamlined district/ sub-division wise and these may widely be circulated among the public so that the public can get an easy and ready mechanism to access to correct information as well as clarification. The same may be intimated to this end”.

India to export Covid-19 vaccines to Bangladesh free of cost