“Considering the low attendance of school teachers to their duties due to no proper dwelling place for them, quarters are being constructed so that the teachers can concentrate in teaching the students,” CEM Gorlosa said while addressing a gathering on the occasion of the 71st Republic Day.

The 71st Republic Day was centrally celebrated at the Kendriya Vidyalaya playground near Assam Rifles in Haflong.

Speaking about the achievements of the council under his leadership, Goslosa acclaimed that the villages like Laisong, Dihamlai, which had never dreamt of having proper passage to their villages, now have been benefitted with good roads.

Simultaneously, the Republic Day was also celebrated in other parts of Dima Hasao including at Maibang subdivision where SDO (Civil)Manojyoti Kutum, unfurled the tri-colour in the M.E. School field, Maibang accompanied by Maibang SDPO Sajahan Sarkar. 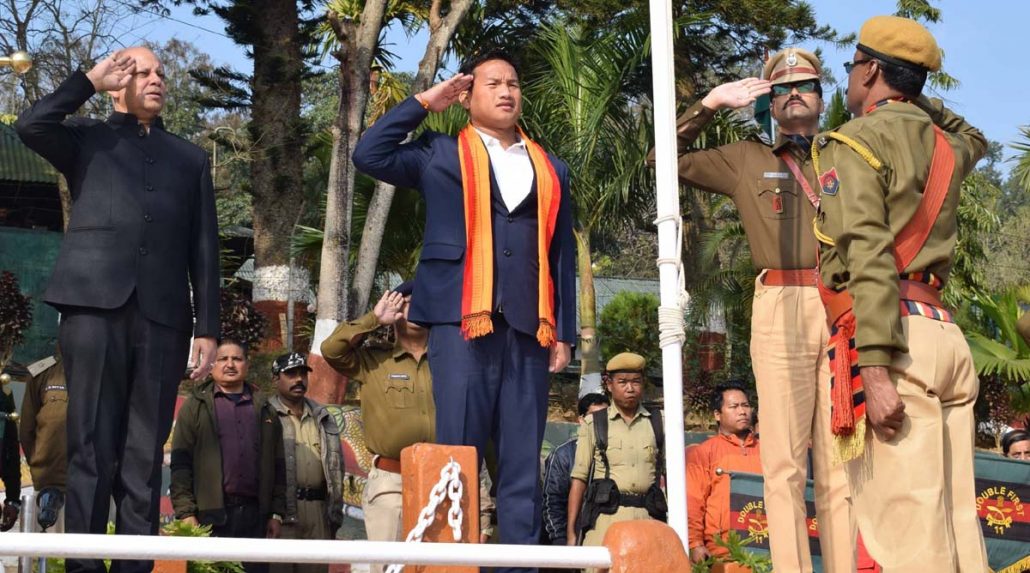 The day’s programme at Haflong began with the ceremonial flag hoisting after shahid tarpan by the CEM, DC, SP and other guests followed by the singing of National Anthem by the students.

After that, the chief guest of the programme, CEM Gorlosa, inspected the participant contingents.

CEM Gorlosa extended his wishes for ‘Busu’, the harvesting festival, which is celebrated by the Dimasa community all over the world on January 27.

Colourful dances were performed during the occasion by various communities of the district.

Thousands of people gathered at the venue to celebrate the Republic Day and many awards were also distributed during the ceremony.

The CEM also awarded a cheque of Rs. 1 lakh to the villagers of Purana Dimainu, represented by their village headman declaring it to be the cleanest village of Dima Hasao.

Among the recipient of the awards was Hosea L Tulour of Dima Hasao who was among the team that won the second prize during recently concluded Khelo India at Guwahati, Surjya Thaosen for his contribution in the field of media and journalism in Dima Hasao.

A prize of appreciation was received by the participants of the contingents from the VIPS, by the students who sang the National Anthem at the venue.

The programme was attended by the executive members and members of the NCHAC, officials from the district administration and NCHAC, Haflong, Army and Assam Police, officers from various departments, senior citizens, NGO’s, students and teachers.

After the programme at the venue, CEM Gorlosa along with his council members and executive members in presence of the officials laid the foundation stone for construction of the CEM’s secretariat at the premises of the council secretariat, Haflong.