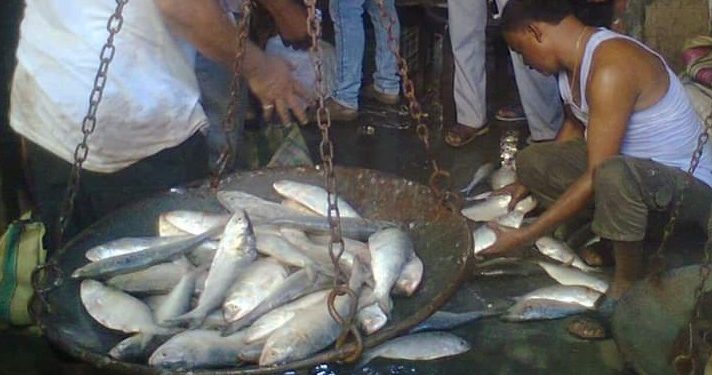 The flow of iconic fish Hilsa is rising in Assam’s Dhubri market during this particular season since the last couple of years.

Even traders from outside have thronged the local markets of Dhubri to buy the king of fish in bulk.

This has resulted in hike in the prices of the fish in local market.

The common people have to pay more price then expectation due to the syndicate of illegal trade of Hilsa.

Sources revealed that minimum 10 -12 mini trucks loaded with hilsa fish in the wee hours are transported to Bengal and other parts of north-eastern states every day resulting.

This has led to rise in prices of the fish in the local market.

Remarkably, a month ago, the price of the hilsa fish in Dhubri market was above Rs 900-1000 per kilograms, but due to the easy availability of the fish in river Brahmaputra, the price has dropped to Rs 250-Rs 450 per kilograms.

But, again the prices of hilsa has gone up to Rs 500-600 per kilograms due to rampant trading.

Notably, in the year 2017,the state Fishery department had issued an advisory regarding over fishing & catching of juvenile hilsa less than 23 centimeters in length for ensuing better hilsa production.

Even measures were taken for conservation as well as protection of the fish against over exploitation.

The advisory which was issued to the deputy commissioners of four districts of lower Assam namely Dhubri, Goalpara, South Salmara Mankachar and Bongaigoan in which it was clearly stated that the hilsha fish is marine, freshwater, brakish, pelagic–neritic, and anadromous.

It can grow up to 60 centimeters in length with weight up to three kilograms.

The fish shoals in coastal water and ascends up the rivers (anadromous) for around 50-100 kilometers to spawn during the south west monsoons (June to November) and also in January to April.

And, acting on the said advisory of Fishery department, the Dhubri district administration had also issued a letter to the local  authorities  concerned through which it has been directed to make awareness by printing leaflet, give wide publicity and also carried raids if needed,  in order to prevent over fishing and catching small hilsa with immediate effect.

But, in a surprising way, neither the district administration nor the Fishery department has come forward to protect and  preserve the iconic fish later on.