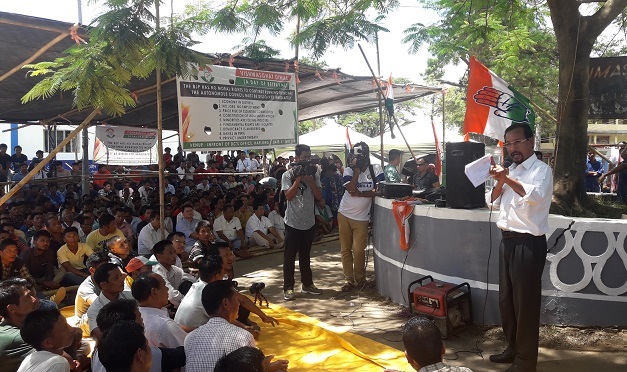 The Dima Hasao district Congress observed ‘betrayal day’ at Haflong on Wednesday as a part of the Assam Pradesh Congress Committee’s call to statewide protest against the BJP-led Central Government’s failure to control the price hike of petrol, diesel, gas cylinder and essential commodities prices.

The activists demonstrated in front of the deputy commissioner’s office at Haflong.

Criticising the BJP-led government at the centre, state and the North Cachar Hills Autonomous Council (NCHAC), the Dima Hasao district Congress president Nirmal Langthasa said, “Prime Minister Narendra Modi is a liar. He has failed to fulfill the promises made before 2014 Lok Sabha elecetion.”

A large number of Congress activists along with locals joined the protest programme.

Dima Hasao district Congress vice-president Depolal Hojai came down heavily on the saffron party-led government for non-release of the Normal department workers’ salary for the last 10 months in the district.

Talking about the extension of NCHAC’s term by the Assam Governor, Dima Hasao district congress vice-president Hamjanan Langthasa said, “BJP has extended the term of the Council as it is afraid of losing the Council election.”

Moreover, he alleged that NCHAC CEM Debolal Gorlosa is involved in encroaching government land in the district.

Congress leader Jack Daulagupu, who joined the protest programme, said, “The NCHAC has done nothing for the development of the district.”