Assam BJP rules out privatisation of the Mini Ratna PSU 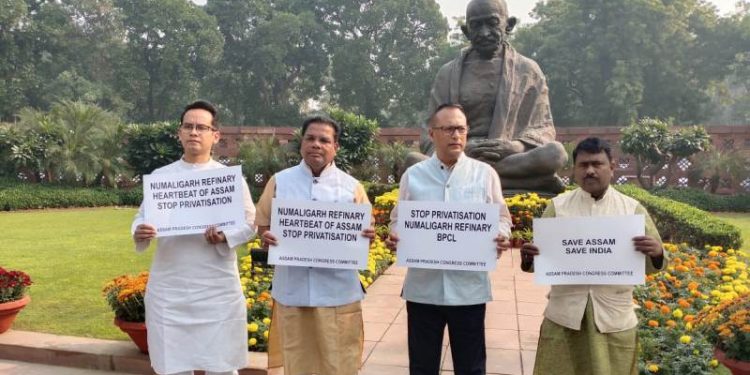 Congress MPs from Assam on Tuesday staged a protest in front of Mahatma Gandhi’s bust in Parliament premises against the proposed privatization of Numaligarh Refinery Limited (NRL) in the state.

“We are totally against the privatisation of NRL. People of Assam are emotionally attached with the NRL…how can the government allow disinvestment in the refinery,” Assam Pradesh Congress Committee (APCC) president Ripun Bora said.

Besides Bora, three Lok Sabha MPs of the party, Pradyut Bordoloi, Gaurav Gogoi and Abdul Khaleque participated in the protest.

Accusing the government of playing with the sentiments of the people of Assam, Bora said that the disinvestment would also dilute the essence of historic Assam Accord.

Union finance minister Nirmala Sitarama had recently said that BPCL would be privatized to give a boost to the country’s economy.

BPCL holds 61.65 per cent shares in NRL where as Government of Assam holds 12.35 and Oil India Limited 26 percent of share in refinery.

NRL was set up under the Assam Accord of 1985 for an overall economic and industriaql development of the Northeastern states.

The BJP, however, maintained that the NDA government at the Centre had not taken any decision to privatize the NRL.

Assam BJP spokesperson Rupam Goswami said on Tuesday that Union petroleum minister Dharmendra Pradhan has made it clear in response to a letter from Assam chief minister Sarbananda Sonowal.

Earlier Sonowal had written to Prime Minister Narendra Modi, finance minister Nirmala Sitharaman and to the Petroleum Minister Pradhan informing them about the emotional attachment of people of Assam with the NRL.

The Chief Minister in his letter urged the Central government not to privatize the NRL and take all necessary special steps to improve the NRL.

“The BJP led government at the Centre as well as at the state are not going to do anything which is detrimental to the interest of the people of Assam,” Goswami said.