Assam: Concrete bridge is still an elusive dream for this village in Udalguri 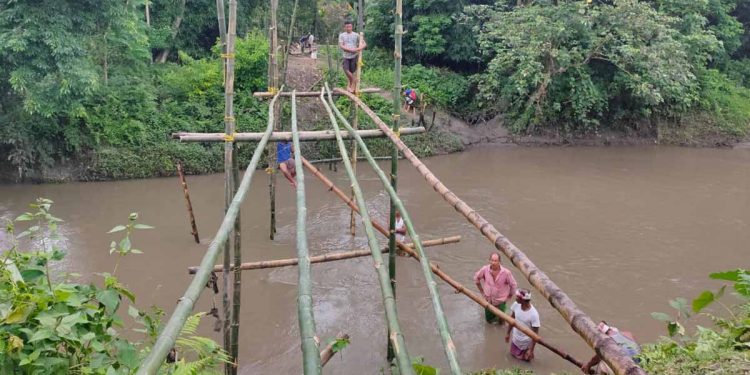 Even after remaining in power for 17 long years, the Bodoland People’s Front (BPF) couldn’t change the fate of the villagers of Uttar Chabukdara under Khoirabari BTC constituency.

Locals here have alleged that even after over one and a half-decade, their repeated pleas for an RCC bridge in the area fell into deaf ears and no one-either from Dispur or from Kokrjhar ha come to their rescue.

There is no bridge over the Kalapani river which flows through the middle of the village owing to which the villagers spend their hard-earned money to construct a bamboo bridge which has turned an annual affair for the villagers.

“The villagers have formed a committee to construct the bamboo bridge and have also collected funds from households as the construction demands money and hard work,” said Bhabesh Rabha a villager.

President of the construction committee Sanjit Rabha said, “We grew up in this village and our childhood dream of a concrete bridge remains unfulfilled, the public representative visit us and assure of the needful and even prepare proposal estimates but it doesn’t get materialize now we are in dizzy as to who is to be blamed?”