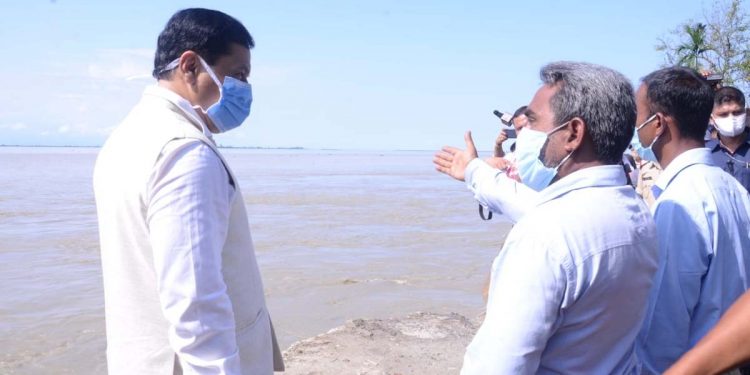 Assam chief minister Sarbananda Sonowal on Monday visited Rohmoria in Dibrugarh and announced 3 schemes at a cost of Rs. 25 crore for a permanent solution to the erosion problem in the area.

The Assam government announced three other schemes in December last year at a total cost of Rs. 18 crore which are at different stages of implementation.

The three schemes announced on Monday would provide protection to the villages of Liting Gaon, Rohmoria Gaon and Bogori Tola Lukasoni Gaon in  Rohmoria from erosion.

Sonowal also took stock of progress in the porcupine construction work carried out under SDRF in Rohmoria.

After interacting with the local people, the chief minister announced that a rehabilitation policy would soon be taken up by the state government for the flood and erosion hit landless people.

Later talking to the reporters, Sonowal informed that a total of 25 lakh people in 28 districts have been affected by the current wave of flood in the state.

Erosion has also affected many districts in the state and the state government has been giving priority on construction of embankments for providing protection form flood and erosion.

Saying that erosion has been a perennial problem of the areas under Rohmoria, Sonowal said people here have been carrying on with democratic movements to bring permanent
solution to the problem.

The state government has been dedicatedly pursuing the objective of permanently solving the issue of flood and erosion in the state and for that purpose, a joint river management mechanism has been mooted with other Northeast states and Bhutan, he said.

He also said dredging in Brahmaputra would take place as soon as the dredgers arrive.

Later, the CM visited the flood relief camps at Dinjoy Hazarimal HS School at Dinjoy, Chabua and took stock of the facilities there while also interacting with the inmates.

A total of 77 flood affected families from Dodhia Sarisuti Gaon have been provided shelter in this relief camp.

The chief minister also visited the flood relief camp set up at Kalaguru Bishnu Rabha Auditorium and Bindhakata High School at Bindhakata in Dibrugarh and interacted with the inmates where 110 families from the villages of Tengabari and Mirigaon have taken shelter.

While interacting with the media persons after his visit to the relief camps, the CM said the entire area from Dinjan Tea Estate to Balijan have been affected by erosion  and a lot of people have been rendered landless due to this.

The water resources department has been implementing a project worth Rs. 17 crore for permanently solving the problem of erosion in the area and the state government is also actively considering another project worth Rs. 24 crore, Sonowal said.