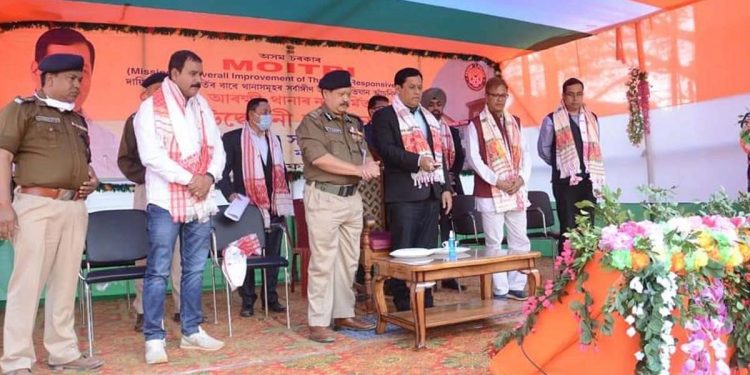 A view of the event in Hojai.

Sonowal remotely inaugurated the new buildings of the police stations of Pulibor in Jorhat, Sonari in Charideo and Hamren in West Karbi Anglong.

The police stations have been constructed under the Mission for Overall Improvement of Thana for Responsive Image (MOITRI) scheme.

The new building of Hojai PS has been constructed at a cost of Rs 1.49 crore.

Speaking on the occasion, chief minister Sonowal said, “These police stations have been developed with high-tech technology to cope up with the present situation.”

Chief minister Sonowal visited Hojai on Sunday for inauguration of a number of welfare projects.

Then he addressed hundreds of BJP workers of 91-Hojai constituency which was followed by the inauguration of new building at Hojai police station.

The chief minister also laid the foundation stone an arts building at Rabindranath Tagore University which will be constructed at a cost of Rs 1.5 crore.

While addressing the students, chief minister Sonowal said, “There is no shortcut to success. Hard work, perseverance, strong determination and dedication are the only keys to success.”

The CM further said the university has been established in the name of the great litterateur Rabindranath Tagore, who illuminated the social, cultural and literary lives of the country and helped the people to go forward.

He also said Rabindranath Tagore spread the message of humanity and called upon the students to go forward adhering to the principles of the litterateur.