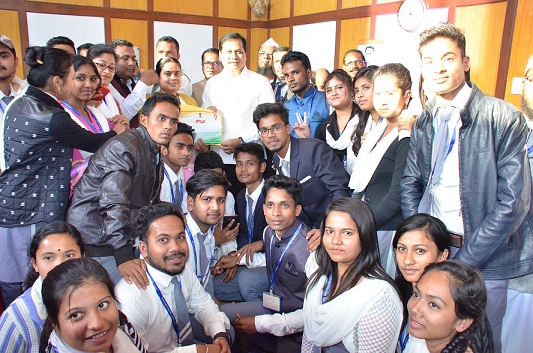 Chief Minister Sarbananda Sonowal on Monday interacting with a group of students of three colleges of Dhubri district at the Central Hall of Assam Legislative Assembly. Photo: DIPR

Assam CM Sarbananda Sonowal on Monday interacted with a group of students of three colleges of Dhubri district at the Central Hall of Assam Legislative Assembly and urged them to discover the resources of their land and contribute meaningfully in realizing its potential.

Interacting with the students of BM College, Promothes Baruah College and Bilasipara College of Dhubri district, Chief Minister Sonowal said, “Assam is endowed with rich natural resources. The land of the state is very fertile and is known for its productivity. Districts like Dhubri have always been contributing to the growth of the state. Students being the future of the nation have to discover the potential of the land and work to maximize its productivity”.

Assam CM also urged the students to work hard with sincerity and discipline to excel in life. Sonowal also outlined the initiatives taken up by the state government for the development of Dhubri. “The Dhubri-Phulbari Bridge which is proposed to be constructed by the government would be the longest in the state. Moreover, construction work for Medical College at Dhubri has already started”, he informed.

The Chief Minister further advised the students to uphold the democratic tradition of the country. He asked them to take active part in the nation building initiatives and hoped that the experience gained by them through the exposure visit to the Legislative Assembly would immensely enrich them.

Taking part in the interaction, the students also shared their experience on the proceedings of the House. As part of the programme, the Chief Minister also gave away certificates of participation to the visiting colleges.

State Assembly has taken up this novel initiative under which students from different colleges of the state are invited to witness the proceedings of the House and they also get an opportunity to interact with the Chief Minister as part of the programme.