Assam: CEM Gold Cup 2019 to be kicked off tomorrow

Besides Mohan Bagan, Salgaocar FC and Goa FC from outside India, organisers have invited teams from Nepal, Bhutan and Sri Lanka

The Chief Executive Member (CEM) Gold Cup 2019 will be kicked off on Wednesday in the newly-built Karbi Anglong Sports Association (KASA) Stadium here.

Informing about football tournament during a press conference here on Tuesday, KASA president Tuliram Ronghang, who is also the CEM of Karbi Anglong Autonomous Council (KAAC) said they have struggled a lot to see this day.

Recalling the old days, CEM Ronghang said, “There were days when we hired halogen lights from Nagoan and tied those up on bamboo poles to light up the ground at night. Today, we are trying to hold a match at par with international standards.”

He also said, “We have invited renowned football clubs of the country including Mohan Bagan and Goa FC. All the teams from the Northeast have also been invited. Bordoloi Trophy is still national level tournament, but we are trying to hold CEM Gold Cup at the international level. The opening match will be played between Daimalu Sports Club and Assam Rifles, Shillong.” 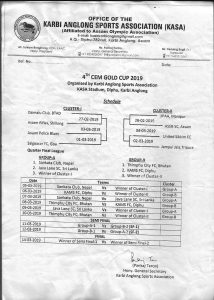 “Salgaocar FC, who are champions of I-League, which is one of the major football tournament in the nation, will also join the CEM Gold Cup,” said Ronghang, adding, “From outside India, we have invited teams from Nepal, Bhutan and Sri Lanka. We have also invited a team from Indonesia but their participation is not confirmed yet.”

Informing about the players to be participated in the tournament, Ronghang further said, “International player one each from Brazil and Columbia will come. The Brazilian will play defence and the Columbian is a striker for Morning Star FC. The other teams may also bring their own players from outside the country.”

The KAAC CEM urged all to extend cooperation for making the football tournament a grand success.