The proposed Bill will frustrate the Assam Accord, which is the fruit of the six-year-long agitation of the Assamese people: Shiv Sena MP Sanjay Raut

At a time when the BJP is in a move to pass the Citizenship Bill, 2016, its ally Shiva Sena has decided to oppose the controversial Bill in the Parliament.

MP and leader of the Shiv Sena Parliamentary Party, Sanjay Raut on Sunday stated the party is determined to oppose the Citizenship (Amendment) Bill, 2016 in the Parliament as there have been vehement protests going on against the Bill throughout Assam.

He stated: “…the ongoing protest against the bill throughout Assam has made it clear that the people of Assam irrespective of caste, creed and religion” are against the Bill.

The decision comes in response to an appeal from Assam’s regional party Asom Gana Parishad (AGP), which is also a partner of the Bharatiya Janata Party-led coalition Government in Assam.

The regional party of Assam, AGP “appealed to us to oppose the bill in the greater interest of indigenous people of Assam and its language, culture and for protection of identity of Assamese people,” Raut stated in a press communiqué. 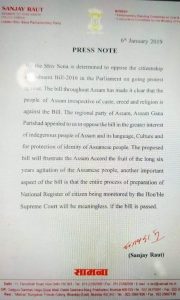 The Shiv Sena MP said the proposed Bill will frustrate the Assam Accord, which is the fruit of the six-year-long agitation of the Assamese people.

He also stated another important aspect of the Citizenship Bill, the entire process of preparation of the National Register of Citizens (NRC), which is being monitored by the Supreme Court will be meaningless if the Bill is passed.

Informing about Shiv Sena’s decision to oppose the Bill in the Parliament, former Assam Chief Minister and AGP leader Prafulla Kumar Mahanta on his Twitter handle on Sunday stated:  “On our appeal Shiv Sena has decided to oppose the Citizen Amendment Bill in Parliament. Our agitation was for Assam, is for Assam and will remain for Assam.”

It may be mentioned that a Joint Parliamentary Committee (JPC) was formed on the Citizenship (Amendment) Bill, 2016 and after examining it the JPC will table its report in the Lok Sabha on Monday.

According to reports, several political parties and BJP allies including JD(U), Shiv Sena and AGP are all set attack the Government on January 7 when the  Joint Parliamentary Committee (JPC)  submit its  report on the Citizenship Bill  in the Lok Sabha.