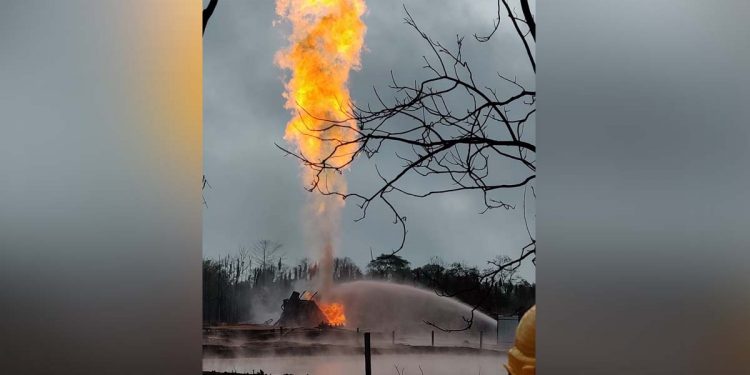 Oil India Limited(OIL) has failed to douse the Baghjan 5 oil fire which has entered 44th day on Thursday.

Six experts from Singpore-based Alert Disaster Control were called to control the fire at Baghjan 5 oil well but they have also failed to douse the fire till date.

Massive fire engulfed the entire Baghjan area causing damages to lives and property of the people.

Maguri-Motapung beel was affected due the blowout.

Oil and condensate starter flowing in the Maguri-Motapung beel harmed the aquatic animals and birds.

Parts of Dibru-Saikhowa National Park were also affected due to the massive inferno.

Under the banner of Baghjan Gaon Milanjyoti Sangha, the affected people recently staged a protest in front of Tinsukia deputy commissioner’s office seeking compensation for those who were affected by the fire.

On Tuesday, the locals of Baghjan tried to enter the affected area which has remained cordoned off due to the ongoing work to control the blaze.

The people went for self-immolation but the police prevented them and drove them back from the affected area.

Speaking to Northeast Now, Nirantar Gohain, an environmentalist said Oil India Limited (OIL) has failed to control the fire and day by day the blaze has been causing problems for the entire ecosystem of Dibru-Saikhowa National Park.

“The intensity of buzzing sound from the blowout area has been increasing for the last few days and the tremors are still going on since the second blowout that occurred on June 9,” said Gohain.

The team from M/s ERM carried out consultation with fisherman in Maguri Beel area and ecological survey in Maguri Grassland area on Wednesday.

M/s ERM’s study will continue till one week beyond the date of capping the well successfully.

“Due to continuous rain and movement of heavy vehicles, condition of the approach road to well plinth keeps deteriorating,” an OIL official said.

“Despite deterioration, the progress of debris removal is continuing. Efforts are on constantly to repair the bad patches of the road. Preparations are on for debris removal from the well plinth as reported this morning,” the official added.