The 8 candidates will contest for different Assembly seats in three different phases of the Assam Assembly elections.

Kamal Kumar Medhi, the former KMSS leader, who joined the Congress and quit the party to join Raijor Dal, will contest from Bhabanipur seat. 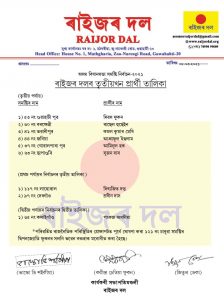 After joining the Raijor Dal, Medhi had announced that if the party allows he would love to fight from Jalukbari constituency, which is represented by BJP leader and powerful minister Himanta Biswa Sarma.

For the third phase, Aminul Haque has been given Raijor Dal’s ticket to contest in Goalpara East constituency and Sujan Das will fight from Chapaguri Assembly constituency.

For the second phase, Pankaj Asomiya’s name has been announced as the Raijor Dal ticket for Kalaigaon seat.

In the third list, signed by Raijor Dal’s executive presidents Bhasco De Saikia, Kabindra Chetia Phukan and Jitul Deka, the candidature of Chabua constituency has been changed keeping in view of the changing political situation.

Now, instead of Dipanjyoti Phukan, as announced earlier, Bhaben Barua will fight from Chabua Assembly constituency.