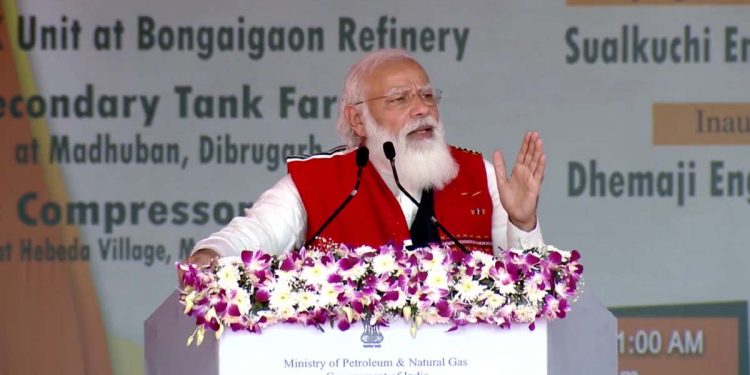 Prime Minister Narendra Modi on Sunday said the dates for the Assam Assembly election are likely to be announced by the Election Commission of India in the first week of March.

Prime Minister Modi made the announcement while addressing a gathering at Silapathar in Dhemaji where he launched a total of five projects, worth more than Rs 3,000 crore.

In his third visit to Assam within 30 days, ahead of the State Assembly election in the state, Prime Minister Modi on Monday virtually inaugurated three major projects in the oil sector in Assam and the Dhemaji Engineering College.

The projects in the oil sector of Assam, which were inaugurated by the PM on Monday, include IOCL-INDMAX unit at Bongaigaon Refinery, Oil India Limited’s (OIL) Secondary Tank Farm at Madhuban, Dibrugarh and a Gas Compressor Station at Hebeda village in Makum of Tinsukia district.

While addressing the gathering, PM Modi said, “I’m fortunate to visit Dhemaji for the third time.”

He visited Dhemaji on December 25, 2018 when he inaugurated the longest rail-cum-road bridge in India.

“Our government that works with the motto of Sabka Saath, Sabka Vikas, Sabka Vishwas has led to rapid development of Assam,” he said.

“Works such as completion of Bogibeel Bridge and broad gauge railway line in North Bank have been done by our government,” he mentioned in his speech.

The PM claimed the motto of his government is to empower the Northeast as a new engine for India’s continued growth.

Modi said the Centre and the Assam government are working together to develop infrastructure in the state.

“Centre and Assam government are working in collaboration to develop the infrastructure of the state. Despite the state having great potential, the former government gave it a ‘step-motherly’ treatment by overlooking development in various sectors,” Modi said.

PM said the Dhemaji Engineering College is the first engineering college in the north bank (of the Brahmaputra valley) in Assam.

More such engineering colleges are coming up in the state, he said.

The Prime Minister claimed to have brought changes in the scenario of LPG and electricity connections during the period of the NDA government.

With the help of Ujjwala Yojana, LPG coverage in Assam stands at nearly 100% today!

He said efforts have been made to give a boost to the waterways and mentioned the laying of the foundation of the Inland Water Transport (IWT) Terminal at Jogighopa for this purpose.

He said he would like to visit the state again before the election.