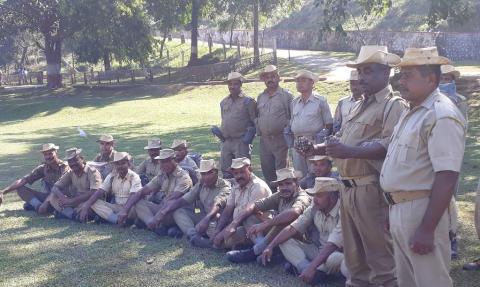 The authorities in Assam are likely to take action against over 500 Home Guards who refused to perform election duties and went to their homes.

Cachar district Police Superintendent Bhanwar Lal Meena said that conduct of the second phase of the Assembly election in southern Assam on Thursday was not hampered and the election process was very peaceful and smooth despite the Home Guards refusing to perform election duties.

Hinting to take action against the disgruntled Home Guards, the district police chief said that a section of the personnel (Home Guards) did not keen to hear the logic of the authorities about their wages.

“Refusal to perform election duties is against the law,” Meena told reporters.

Election officials in Guwahati said that the authorities had earlier announced to provide the Home Guards one month wages for the three phases of election duties at the rate of Rs 300 per day.

“In the first phase of election duties in eastern Assam (upper Assam), they got Rs 5,100 and the remaining amount out of a month’s total wages of Rs 9,000 supposed to be paid in the second and third phases. But they want a similar amount like that of the first phase,” an election official said on condition of anonymity.

However, the Home Guards comprising men and women, engaged on a contractual basis at the rate of wages of Rs 300 per day, while talking to the media alleged that the local administration did not arrange proper food, shelter, toilets and even water for them.

“We have requested the police and election officials to increase our wages but they said that they would give us Rs 900 or Rs 1,000 for three to four days of election duties in the second phase. How can we manage for 3-4 days in just Rs 900 or Rs 1,000?” a Home Guard personnel questioned.

The Home Guards before returning to their homes had organised protests and demonstrations and gave slogans against the Assam government and police officials.