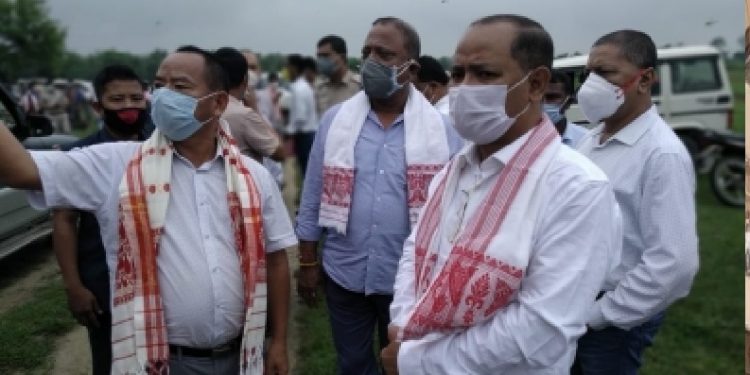 Amid the border tension, Assam Environment and Forest Minister Parimal Suklabaidya on Friday visited areas on the border with Arunachal Pradesh, following reports of encroachment and destruction of forest from other side leading to tension.

In view of border row leading to exacerbation of tension at Joyrampur-Chilonibasti close to the Assam-Arunachal Pradesh inter-state border, Minister Suklabaidya visited the areas and talked to the officials and local people to defuse the tension and to restore peace and normalcy, said a statement.

Union Home Minister Amit Shah, while presiding over the North Eastern Council meeting in Shillong in January this year, had urged all the states in the region to solve their boundary disputes by August 15, 2022, when the country celebrates 75 years of Independence.

Encroachment in border areas, and various unlawful activities, including attacks and abductions, infrequently took place along the inter-state borders of the northeastern states leading to major incidents.

Suklabaidya, who had visited the area last month too, said the people of both the neighbouring states would have to live in peace and harmony.

“We must shun confrontation and resolve our problems in an amicable manner. And for that to happen we must restore peace and tranquility and live in peaceful coexistence,” he said.

The minister appealed to the MLAs and the local people to prevent encroachments of forest land and ensure that trees were not felled and the environment is protected as “the brunt of deforestation has affected everyone”.

Suklabaidya said the Assam government has been trying to resolve the border disputes with Arunachal Pradesh, Meghalaya, Nagaland, and Mizoram.

He said as the matter relating to border dispute with Arunachal Pradesh is pending in the Supreme Court, status quo has to be maintained.

“The present Government is not only trying to bring about a permanent solution to the border disputes with our neighbouring states at the highest level but also exploring ways for finding a solution by way of out of the court settlement,” he added.