Minister Bora, who is also the president of AGP, had gone to Jagduar to address a party meeting 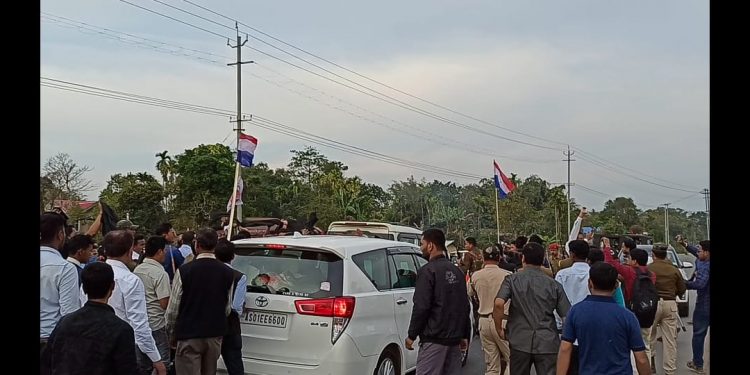 Minister Bora, who is also the president of AGP, had gone to Jagduar to address a party meeting.

Minister Bora, who is also the president of AGP, had gone to Jagduar to address a party meeting.

The AASU activists of Teok, Lahing, Lahdoigarh shouted slogans and showed black flags to the convoy of minister Bora in protest against the Citizenship Amendment Act (CAA).

The police chased away the AASU members who ran away in different directions.

The action by the student group resulted in an altercation with AGP supporters and the allegation by AASU that the AGP had thrown pieces of bricks at them.

He said that the AGP had only shouted slogans in support of Atul Bora and the AGP.

Teok unit AASU unit president Jitu Baruah said the AASU would continue its agitation against the CAA and any leader who supported the Act would be shown black flags.

The AGP is an ally of the BJP in the state government.

Neog further said Bora, who was once an AASU leader who had actively participated in the six year Assam Agitation in the eighties had forgotten the sacrifice of the 860 martyrs during the agitation to oust illegal migrants and was now supporting such an Act which would bring in more illegal migrants into the state.

Neog further asked Teok MLA Renupoma Rajkhowa, also of the AGP to rein in her party leaders and supporters otherwise she would not be allowed to address any public meeting at Teok.