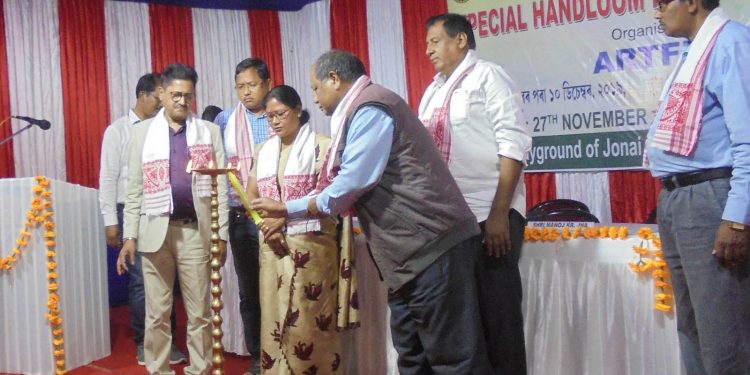 A view of the inaugural ceremony of ‘Special Handloom Expo 2019-20' at Dhemaji on Wednesday. Image credit - Northeast Now

The expo, sponsored by Development Commissioner for Handloom under the Union Ministry of Textile, aims to promote marketing of Indian hand-woven textile products and encourage the rural weavers to adopt the trade as way of livelihood.

The ARTFED is organizing the expo under its National Handloom Development Programme (NHDP).

ARTFED also plans to hold such expos at Biswanath and Dudhnoi respectively.

She informed that Assam government, observing the growing demand of handloom products, has taken steps to encourage rural weavers to adopt such activities in commercial purposes.

She asked the Handloom & Textile officials to take care of the centre and report its function to the authority from time to time.

Explaining objective of the expo, ARTFED managing director Mukul Chandra Deka said the expo would give the opportunity to local weavers to introduce marketing systems of their hand-woven cloths and other finished products.

“We conduct expo in order to introduce the weavers with marketing systems of their hand-women cloths and other finished products,” added Deka while informing that the weavers’ federation is running 33 Yarn Banks and Handloom Sale Centres in different parts of Assam.

“We have opened the Yarn Banks in different district and sub-divisional headquarters to supply quality yarns such as cotton, tossar and polyster to the weavers in subsidized rate,” he maintained.

About 65 societies, NGOs and Women SHGs from nine Indian states including Delhi, Haryana and few NE states have put up stalls in the ongoing expo.

The special handloom expo will come to end on December 10.