Assam chief minister Sarbananda Sonowal on Sunday has invited Singapore and other ASEAN countries to set up their consulates in Guwahati. He was addressing the ASEAN-India Pravasi Bharatiya Divas at Marina Bay Sands in Singapore. 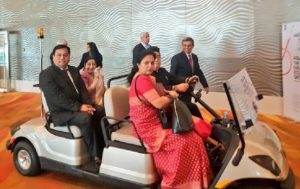 The chief minister said, “We have set up a separate Act East Policy Affairs Department to give a policy push to our efforts. Assam is taking great strides in developing world class infrastructure, with Guwahati poised to be a hub, catering to global businesses.”

The chief minister said that Assam’s historical and cultural relations with South East Asia must be leveraged to forge renewed ties among the nations by making Guwahati India’s expressway to ASEAN.

Highlighting the close ties of Assam with ASEAN and South East Asian nations, Sonowal said that the Indian diaspora can play a major role in bringing investment, promoting tourism and people to people exchange between Assam and ASEAN countries.

Sonowal had one-on-one meeting with Lulu Group Chairman and MD Yusuff Ali in Singapore and extended invitation to the Advantage Assam: Global Investors’ Summit 2018. He has assured support from the government to Ali’s keen interest to set up cold storage facility in Assam and export fruits.