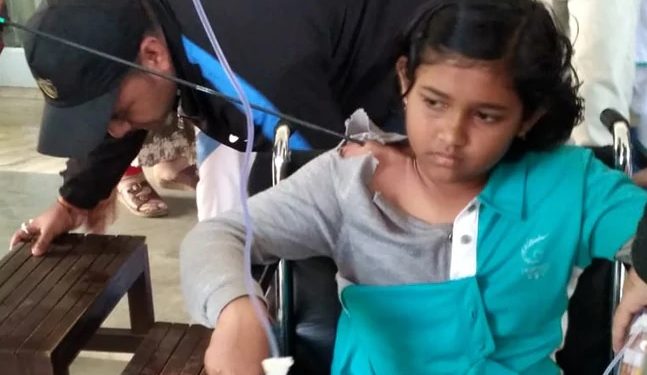 Shivangini Gohain is being treated by a sports doctor at Safdarjung hospital in Delhi. Image courtesy: NDTV

Shivangini Gohain, an archer from Assam, was seriously injured after an arrow accidentally pierced her neck during a practice session on Thursday.

Gohain, whose accident took place on the eve of the third edition of the Khelo India Youth Games, had to be airlifted to Delhi after she was injured during the training session at Chabua in upper Assam’s Dibrugarh district.

Although the 12-year-old archer had first been admitted to Safdarjung Hospital in New Delhi, she was later taken to All India Institute of Medical Sciences (AIIMS) Trauma Centre for treatment.

Gohain, a trainee at the Sports Authority of India (SAI), was, however, not a participant of the third edition of the Khelo India Games.

A senior SAI official said that the sports institute is bearing all the expenses of her treatment.

The third edition of Khelo India Youth Games will be held between January 10 and 22 at the Indira Gandhi Athletic Stadium.

The objective of the games is to create the spirit of sportsmanship among the athletes.

Entries are free for the entire event including the closing and opening ceremonies.

Around 170 hotels have been booked in the city for the accommodation of 6500 athletes, 1000 technical staff and 2500 support staff.