The Special Judge’s Court sent the two officials, who were arrested by Dibrugarh Police on Tuesday for being allegedly involved in the multi-crore Assam Public Service Commission (APSC) cash-for-job scam, to 14-day police custody.

Informing this to the media, special public prosecutor Bijon Mahajan said that the Special Judge’s Court here sent the two accused allegedly involved in the APSC cash-for-job scam to 14-day custody of Dibrugarh Police as sought by the police. 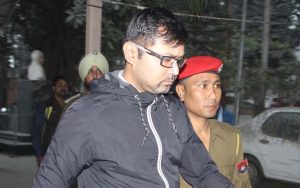 A team of Dibrugarh Police led by Additional Superintendent of Police (Headquarters) Surajit Singh Panesar arrested the two accused. Both the officials are now kept at the Special Branch of the Assam Police in Kahilipara, Guwahati.

“We have arrested both of them in connection with the APSC cash-for-job scam because on the basis of several evidences against the duo. We have started our interrogating them,” Paneswar had told after the arrest of the two.

According to media reports, both Vikash Kumar and Manas Pratim cleared the APSC examination by backdoor with the help of former APSC chairman Rakesh Paul. The duo also failed to give proper reply of questions asked to them during recent test conducted to check the intelligence of the officers who were appointed by manipulating the examination process.

Assam Police on Thursday had filed chargesheet against 25 suspended officials in the cash-for-job scam of the Assam Public Service Commission (APSC).

While 24 officers, who were serving in the Assam Civil Service (ACS), Assam Police Service (APS) and allied services, are currently lodged in Guwahati Central Jail and one accused has been declared as absconder. A lookout notice has been issued in the State to nab absconding official Rakesh Gupta.

Dibrugarh police filed the chargesheet against the officials at the Special Judge’s court in Guwahati.

Police enclosed with the chargesheet the details of the forensic reports of their handwritings and answer scripts.

Hot day ahead in Northeast, temperature likely to be above normal from March to May