Another book on Kamakhya Temple released in Guwahati 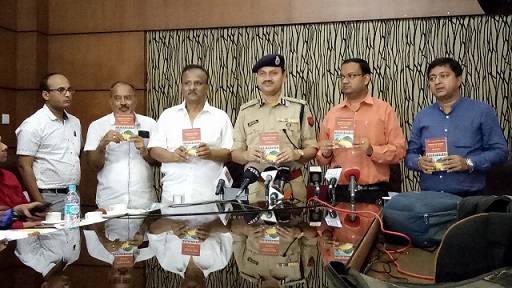 The Kamrup (Metro) Deputy Commissioner, Virendra Mittal and the Commissioner of Police, Guwahati, Hiren Chandra Nath released a book titled ‘Kamakhya Temple Legends and History’, which has been written by author Anup Mahanta.

The book was released during a press conference at the Circuit House in Guwahati on Tuesday.

The book is on the history and mythology of Kamakhya Temple, which is one of the oldest of 51 Shakti Peeths.

Speaking on the occasion, the author of the book, Anup Mahanta said, “Years back, I made an effort to understand the mythological and historical background of the temple. Now, this is a small effort to let people know about the history and mythology of the temple.”

Expressing his happiness at the release of the book, Anup Mahanta said, “My dream has come true today.”

He further said, “I hope the book would be helpful especially for the people from outside the State and abroad who will visit the Kamakhya Temple during the Ambubachi Mela which will begin on June 22. I tried to put all the historical facts and figures concisely in the book so that the people can understand easily.”

The Kamrup (Metro) Deputy Commissioner also lauded the author for coming up with the book and said, “The book will definitely help the tourists. It is a good effort of Anup Mahanta.”

His earlier book on the Kamakhya Temple was ‘Kamrup Kamakhya’, which has been written in Assamese language.

Author Anup Mahanta, a retired engineer, was the chief engineer (Hydro) of Meghalaya Power Department. During the last few years, he has compiled about eight books both in Assamese and English on the historical aspects of places like Delhi and Shillong.