A view of the AJYCP protest in Dhemaji. Image credit - Northeast Now

The Asom Jatiyatabadi Yuva Chatra Parishad (AJYCP) Dhemaji district committee has demanded the state government to deal with the cases pertaining to reported illegal storage of sand and sand-gravel out of the permitted quarries under Dhemaji forest division.

The AJYCP functionaries alleged that a section of unscrupulous contractors in active connivance of forest department officials are conducting illegal excavation on Subansiri river bed thereby posing threat to ecosystem of the area.

It has been alleged that the contractors have extracted minor minerals from the quarries beyond the permissible limit and store huge quantity of sand and sand-gravel at soil conservation sites out of the notified quarry.

The AJYCP Dhemaji district unit staged protest in front of the office of the Dhemaji DC on Wednesday, shouted slogans against destruction of forest wealth on Subansiri river bed and its adjoining areas.

They also submitted a memorandum to chief minister Sarbananda Sonowal through the DC to initiate proper investigation into matter and take action against the smugglers, who are exploiting the minor minerals at Subansiri river basin. 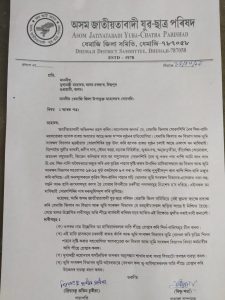 “We are aware of the fact that the contractors with the help of unscrupulous officials of territorial forest and soil conservation departments are continuing the illegal trade of exploitation of the forest wealth at Subansiri river basin. They have extracted minor minerals over the permitted quantity thereby evading huge amount forest royalty,” the AJYCP noted in the memorandum.

The AJYCP Dhemaji district committee led by its president Priyanku Pratim Chutiya and general secretary Bishnu Sharma demanded the state government to initiate a high-level probe into the reported exploitation of forest resources in Dhemaji by the state’s Bureau of Economic Offence and take legal action against the unscrupulous traders and corrupt forest and soil conservation officials accordingly.

It is pertinent to mention that higher-ups of state forest department recently conducted an inquiry into reported smuggling and illegal storage of forest wealth in Dhemaji and caught some forest officials guilty in this regard.

Three foresters posted in Dirpai forest beat under Dhemaji range office are also currently placed under suspension for their involvement with illegal trading on forest wealth.