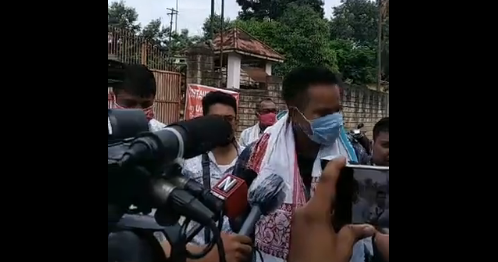 Although a special National Investigation Agency (NIA) in Guwahati on Monday granted him bail, the jail authorities refused to release him from jail on the ‘pretext’ that Guwahati Central Jail is a containment zone.

Manas was welcomed with gamsosas (Assamese scarf) by SMSS members and supporters as he walked out of the jail premises.

While speaking to reporters, Manas alleged that the inmates of the jail have suffered from different diseases due to lack of pure drinking water inside the jail premises.

Manas Konwar, the working president of Sattra Mukti Sangram Samiti (SMSS) – the student wing of the KMSS –was arrested six months ago under the stringent Unlawful Activities (Prevention) Act (UAPA).

The NIA court had ordered his release on Monday.

Konwar, along with SMSS leader Bitu Sonowal, KMSS leaders Akhil Gogoi and Dharjya Konwar, were arrested by the NIA under the stringent UAPA.

They were accused of ‘seditious’ activities which included ‘waging war’ against the nation for their alleged ‘incitement’ to violence during the anti-CAA protests that engulfed Assam last winter.

They were also accused of being overground worker of ‘Maoists’.