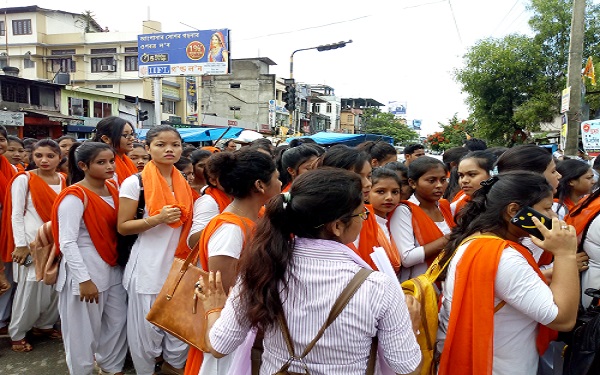 Hundreds of Akhil Bharatiya Vidyarthi Parishad (ABVP) members on Wednesday protested at Thana Chariali against the alleged assault on their leader during college election campaign on Tuesday evening by AASU members.

On Tuesday, the girls of Manohari Devi Kanoi Girls College (MDKG) were campaigning under ABVP for their college election at Vikas road near DHSK College. Suddenly a clash erupted between ABVP members and the AASU activists. The ABVP leader Rohit Boruah was assaulted by the AASU members. The members of ABVP lodged a complaint at Gabrupathar police outpost.

According to the FIR, the students of MDKG College on Tuesday evening were busy campaigning for their college election. “At around 8 pm some miscreants namely Rupjyoti Borthakur, Khagen Dutta, Monuj Buragohain, Raja Gogoi and four others AASU members attacked on our team. One of our leaders Rohit Baruah was badly manhandled by them,” the ABVP members stated in the.

ABVP also alleged that the AASU members assaulted the girls and harassed them and used expletives against them while they were busy in campaigning.

“The AASU members said no ABVP can enter our college and Vikas road as because this is our area and even assaulted our leader very badly,” an ABVP member told Northeast Now.

The AASU members denied the allegation. They said it’s a ploy of ABVP and RSS to defame AASU.

The MDKG college election will be held on August 30.