To popularize Assam’s current target investments and trade with ASEAN member countries, Indian high commissioner to Brunei Darussalam invited representatives from various chamber of commerce at her residence in Kota Batu on Friday. Along with the high commissioner Nagma Md Mallick, Minister of Environment and Forests Assam, Pramilla Rani Brahma was also present at the dinner meet. The representatives were also briefed on the Advantage Assam: Global Investors Summit to be held in February.

Earlier a delegation of Advantage Assam was in Hanoi, Vietnam where another meet was held. Some of the key points discussed at the meet were prospects of trade, industrial infrastructure and collaboration between Vietnam and Assam. 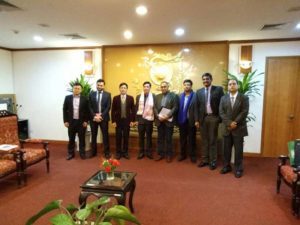 Assam is set to host its first ever Advantage Assam: Global Investors Summit in February. This event will showcase Assam’s manufacturing and geostrategic potential to domestic and foreign investors. It will be held on February 3-4 next year.

The summit will be inaugurated by Prime Minister Narendra Modi and industrialists like Ratan Tata, Mukesh Ambani are set to attend the summit.

Roadshows are also being held at various domestic and international locations as a precursor to the main event. The places where the roadshows will be held are Delhi, Kolkata, Mumbai, Toronto, San francisco, New York, Tokyo, Seoul and Singapore. These roadshows are being organized to attract investors and have already generated positive reviews from the investors.

Around 2,000 industry leaders and representatives from India and abroad are set to attend. The chief minister has had one-to-one meetings with top industrialists, including Tata, Ambani, Adi Godrej, Kishore Biyani, Gautam Singhania, Harsh Mariwala and Subhash Chandra.