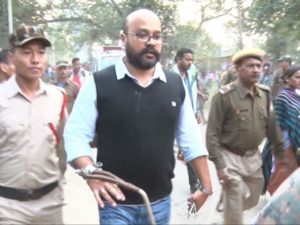 In this incident, the workers of the garden sustained bullet injuries and were admitted to a hospital. After this shocking incident, the tea tribes community organization came out and raised protest demanding punishment of the tea estate owner. The All Assam Tea Tribe Students’ Association (AATTSA) called a 12 hour Golaghat district bandh today.
They also appealed to all the tea garden labourer’s to refrain from going to work.

They blocked NH 39, NH 37 road at Numaligarh and Dergaon today. The bandh, affected normal life in Golaghat district. The bandh supporters staged protest by burning tyres at various places in the district.

Talking to the media, the assistant general secretary of AATTSA, Dhiraj Gowala said the tragic incident happened due to the negligence of assistant labour commissioner and the district administration. The district administration and police have been trying to protect the owner of the Bogidhola tea estate. But they failed to take into account the lives of poor garden families, who spent their lives in garden huts. The poor workers have to fight for bread. AATTSA also demanded magisterial inquiry into the incident.