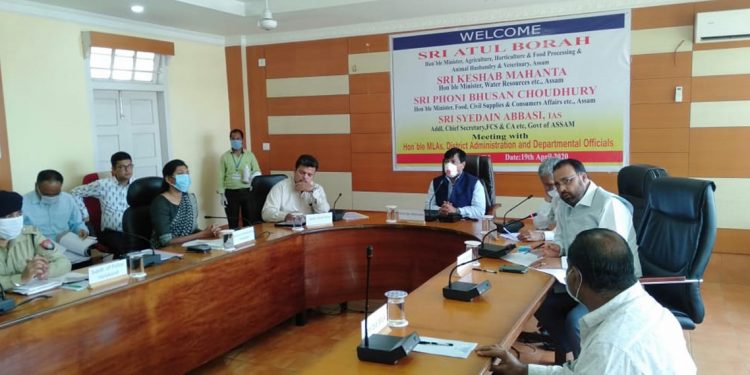 They reviewed the COVId-19 situation with the MLAs, the district administration, officials of the departments concerned and the traders.

Agriculture minister Bora also took stock of the availability of foodgrains and smooth flow of essential commodities in the district.

Bora asked the deputy commissioner to keep a tab on the wholesale and retail prices and to fix the prices to ensure uniformity so that no middlemen can take advantage of the situation during the lockdown.

“We have to ensure production amid the COVID-19 situation by maintaining social distancing during cultivation by the farmers in their agriculture fields,” Bora said adding that 75,000 farmers of the state would be provided seeds.

Bora asked the DC and agriculture officials to distribute tractors to the farmers who have submitted drafts under the Mukhya Mantrir Krishi Sa-Sajuli Yojana and power tillers and shallow tubewells by maintaining social distancing.

District agriculture officer Aniruddha Dutta informed the minister that 550 MT of vegetables have been delivered at the doorstep of the people through 434 hawkers in the urban and rural areas during the lockdown.

He further informed that six wholesale dealers have been engaged for procurement of vegetables from outside the district benefitting 1,250 farmers and 41,200 consumers.

On being apprised about the shortage of cattle feed, the minister assured that he would do the needful.

Food & civil supplies minister Choudhury took stock of the availability of foodgrains in the district.

He asked the administration to ensure uninterrupted flow of essentials, NFSA rice to the beneficiaries, Rs 1,000 to non-card holders and benefits under the Pradhan Mantri Garib Kalyan Anna Yojana and Pradhan Mantri Kisan Samman Nidhi.

Additional director of food civil supplies, Ganesh Choudhury revealed that 200-300 quintals of rice are being distributed and that the flow of essentials is continuing ceaselessly.

Choudhury said 22,000 quintals of rice are in cold storage.

On the embezzlement of rice allotted to Mohonpur GPSS, the minister directed the district administration to take firm action against the persons involved and to file FIRs against them.

Choudhury asked the deputy commissioner to distribute the seized rice among the beneficiaries.

Choudhury directed the district officials to take punitive measures against anyone indulging in hoarding or hiking price.

Earlier, water resources minister Mahanta asked the department to strengthen the embankments and plug the breaches before the onset of monsoon.

He asked the deputy commissioner to summon the contractors to complete the ongoing work on a war footing in the next 10 to 15 days.

“If any contractor fails to complete the work within the stipulated timeframe, he will be put behind bars, as none has the right to play with the lives of the people,” Mahanta warned.

Deputy commissioner Jalli requested the minister to sanction the amount for the Rupacherra-Sonacherra protection work for putting up a sluice gate and flood protection work of Tosla and Kalinagar.

The minister assured that he would take up the matter with the chief engineer and arrange funds accordingly.