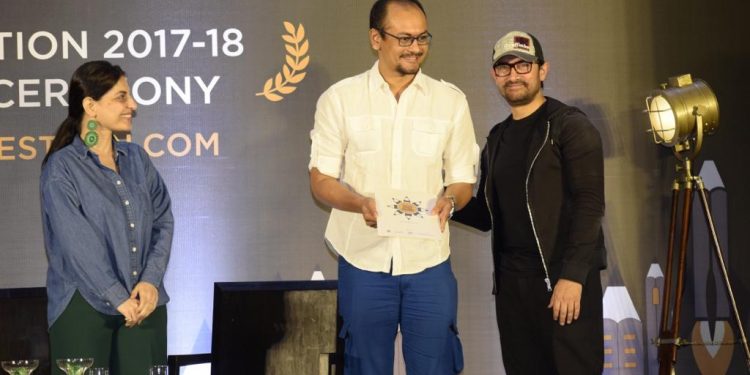 Satyen K Bordoloi won the award for his story ‘Who Will Marry Thomas?’

There were a whopping 3,700 participants in the contest.

Notably, Satyen was closely followed by another Assamese, Rajdweep who won the fourth best award for his story, ‘Ishqlogy (Something Greater Than Technology)’.

The first prize of a carrying a cash award of Rs 25 lakhs was won by Christo Tomy from Kerala whose story ‘Funeral’ got a unanimous thumbs up from all the jury members.

While giving away the awards, Bollywood actor Aamir Khan said, “Without a good script, there can never be a good film. There are many good and deserving writers in our country. However, not all of them have the right platform or opportunities to showcase their talent. Cinestaan India’s Storytellers Script Contest aims at achieving precisely that. We are glad to have successfully concluded the first edition of the contest and we are now looking forward to the second edition too.”

Aamir along with writer-director Rajkumar Hirani and screenwriters Anjum Rajabali and Juhi Chaturvedi were the jury members.

Speaking about the response the contest received, Rohit Khattar, chairman of Cinestaan Digital Pvt Ltd said, “We are delighted by the overwhelming response by the contestants and so grateful for the commitment shown by our eminent jury members. We started this initiative years ago with Mumbai Mantra — Sundance as well as Mumbai Mantra — CineRise Screenwriting initiatives. I am grateful to our esteemed jury in working with us to bring the Indian storytelling talent to the forefront with the successful conclusion of the first edition of the Cinestaan India’s Storytellers Script Contest.”