Assam on toes as heavy rain predicted in North East 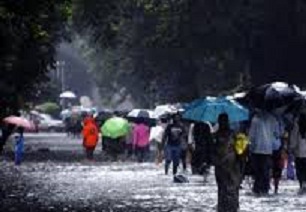 After a dry spell pushing up temperatures from a balmy 32 degree Celsius to 39 degrees in the last one week, weathermen have warned of heavy rain in the northeastern region in the next four days. The India Meteorological Department (IMD) on Tuesday issued a rain alert in the northeastern states till Saturday. Even as Kerala struggles to return to normal after a devastating flood killing more than 300 people since May, the rain alert has put Assam on its toes.

A report published in the The Times of India stated that the Regional Meteorological Centre (RMC) of IMD warned there would be “heavy rain” over Assam, Meghalaya and Nagaland on August 23 and 24 next.

The Deputy Director General of Meteorology (DDGM) Sanjay O’Neill Shaw said that “heavy rain” has been predicted in several northeastern States as the weather over the North East has become favourable for “fairly widespread” rainfall this week. “A depression over coastal Odisha and neighbourhood prevented moisture incursion towards
North East since August 15. This resulted in less cloud formation over the region and that is why the temperature soared. But, of late, the situation has become favourable for heavy rain,” said Shaw. Usually, temperatures in Guwahati in August are around 32 degree Celsius but in the last few days it shot up to 35-39 degrees. While the mercury level almost touched 40 degree Celsius in the North East, on Tuesday it dipped to 36 degree Celsius in Tezpur and Silchar.