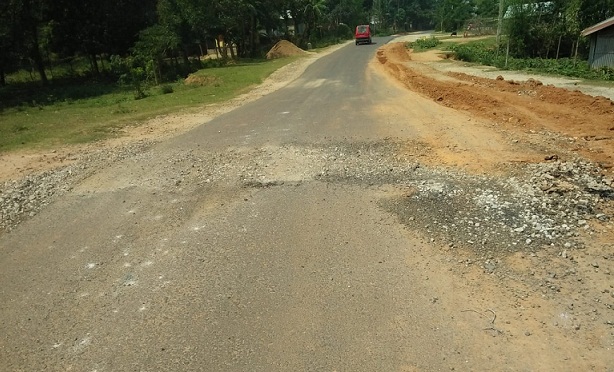 Cracks appearing even after repair works carried out on the state highway-46. Image credit – Northeast Now

The Assam state highway-46 that passes through Goalpara district is currently in bad shape even after carrying out of a repair work worth Rs 5 crore recently.

The road has come under tremendous pressure as an RCC bridge sustained cracks two years back at Krishnai on NH-37.

After the detection of the cracks, the vehicles were directed to move through this road.

The movement of long distance over-loaded trucks including dumpers, which earlier used to ply on the National Highway, has worsened the condition of the state highway, especially in the area between Forestgate to Dubapara.

Adding to the woes, the Assam-bound coal trucks from Garo Hills in Meghalaya, which normally carry overloads from 18 tonnes to 23 tonnes of coal, have further damaged the state highway.

When contacted, Padmananda Choudhury, executive engineer of PWD (rural road division), said, “To curtail the overload menace, we have installed iron bars in two places of the highway – Nepalikhuti and Krishnai.”

However, even the vehicles with permissible loads of 9 tonnes are damaging the road and during heavy showers, the condition of the road turns out to be worst.

Now, the locals have demanded immediate restoration of the Krishnai bridge on the NH-37.

“Until and unless the Krishnai RCC bridge is re-constructed, the state highway-46 will not get respite from the heavy vehicles which are responsible for damaging the road,” said Nani Das, secretary, CPI (M), Goalpara district.

Meanwhile, a section of local residents alleged that the poor repair works, carried out recently by construction company PK & Co., led to the untimely damage of the road.

Even this week, the construction company was seen re-repairing the damaged portions of the road including Helapakhiri, West Paharsingpara, Dekdhowa and so on.

On the other hand, the Agia to Goalpara town road, the only main road directly connecting the town with the National Highway, has been exposed with ditches and potholes from Bhalukdubi, Nirmala Hospital to the rest 300 metres.

The commuters have been suffering due to non-repair of the road for the last two years.